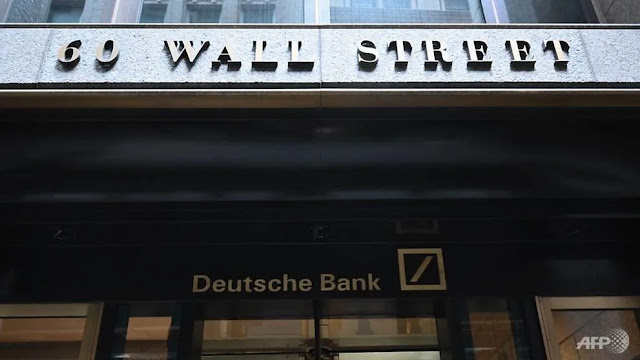 The U.S. Department of Justice is investigating Deutsche Bank AG as part of a broadened probe of Malaysia’s scandal-plagued 1MDB investment fund, according to a person with knowledge of the matter.

Investigators, who have spent years examining Goldman Sachs Group Inc.’s lucrative dealings with the fund, are now taking a closer look at a former Goldman executive who later worked at the German bank, said the person, who asked not to be identified discussing the confidential inquiry. U.S. authorities haven’t accused Deutsche Bank or the former employee of wrongdoing.


The inquiry aims to determine whether Deutsche Bank might have violated foreign-corruption or anti-money-laundering laws as it helped 1MDB raise $1.2 billion in 2014, the Wall Street Journal said in an earlier report Wednesday. Tim Leissner, another ex-Goldman executive who pleaded guilty last year for his role in the scandal, has been helping with the Deutsche Bank examination, the paper said, citing unidentified people with knowledge of the matter.

The WSJ identified the former banker at Goldman and Deutsche Bank as Tan Boon-Kee, who is now working for Hong Kong-based insurer FWD Group Ltd. Tan, who in 2018 was interviewed by Singapore authorities in connection with 1MDB according to people with knowledge of the matter, declined to comment. She left Deutsche Bank last year.


“Deutsche Bank has cooperated fully with all regulatory and law enforcement agencies that have made inquiries relating to 1MDB,” the Frankfurt-based company said in an emailed statement. It pointed to asset-forfeiture documents previously filed by the Justice Department indicating 1MDB misled Deutsche Bank during transactions. “This is consistent with the bank’s own findings in this matter,” the firm said in the statement.

Justice Department spokesman Peter Carr declined to comment.
Probes into 1MDB have mainly focused on more than $6 billion the fund raised in 2012 and 2013 with help from Goldman Sachs, which reaped almost $600 million in fees. The New York-based bank, which has said it’s cooperating with related investigations, has portrayed Leissner as a rogue employee who circumvented its internal controls. The Justice Department now expects to start negotiating with Goldman Sachs soon to potentially resolve a criminal probe, the Journal wrote.