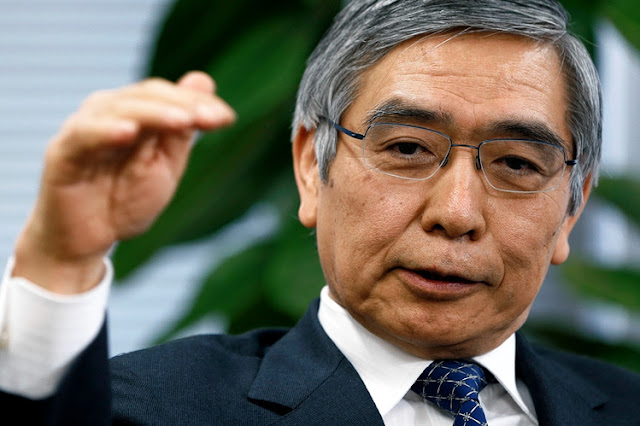 Central bankers searching for options to fight the next downturn should look to Japan, where policymakers are gathering for a regular review of the world’s most epic monetary stimulus program.
The Bank of Japan’s two-decade journey from zero interest rates to massive asset purchases, negative rates and yield-curve control demonstrates a combination of tools that can be used to sustain stimulus — along with the huge damage that piles up when it drags on too long.

As global economic growth wanes, Europe doles out a fresh round of easing and the U.S., Canada, Britain and Australia put rate hikes on hold, economists are asking what more can be done with scant room to lower borrowing costs and already swollen balance sheets.
“Whether central banks like it or not, there is little choice than to venture further with ‘creative’ new strategies to reflate inflation expectations,” said Ben Emons, managing director of global macro strategy at Medley Global Advisors in New York.

Yield targeting, interest-rate ceilings, deeper fiscal and monetary coordination and various forms of asset purchases should be on the radar of policymakers around the world, according to Emons.
Economists are unanimous in forecasting that BOJ Gov. Haruhiko Kuroda and his Policy Board will maintain the current monetary settings at their two-day meeting beginning Thursday in Tokyo. Few see any change this year, and the majority expect Kuroda’s next move will be tightening, but a rising minority now project more easing.

Many of the underlying problems confronting the BOJ — slowing growth, tepid wage increases, lackluster productivity gains and an aging population — are becoming more pronounced in other developed economies. This increases the likelihood of more drawn-out stimulus, pushing others down the same road as Japan.

“When Japan first confronted the problem of very low inflation, monetary economists pooh-poohed the problem, saying there was an easy fix,” said Raghuram Rajan, former governor of the Reserve Bank of India and now a professor at the University of Chicago. “After confronting the same issue in their own countries and showing an inability to deal with it, there seems to be a general consensus that the problem is harder.”

Its latest experiment in yield-curve control involves pinning short-term borrowing costs at minus 0.1 percent and holding long-term rates around zero percent by operations in the bond market.
The tool has drawn the attention of Federal Reserve Deputy Chair Richard Clarida amid an examination of strategy at the U.S. central bank. Clarida has noted that yield-curve control could be helpful when there is little scope for conventional rate cuts, but that it also carries the threat of expanding the balance sheet too much.

But for the BOJ, which has already swallowed up 43 percent of Japanese government bonds, this tool has actually let it slow the pace of purchases and extend the life of stimulus. Its huge holdings of JGBs relative to other investors now allow it to guide rates with relative comfort.

The strategy has relieved a little pressure on Japanese commercial banks by allowing interest rates on longer maturity debt to rise a smidgen, providing a sliver of a margin for lending. But it does little to change the long-term trend for the nation’s regional banks, which are struggling with declining business as the population falls.

In a worrying sign, Mizuho Financial Group, one of Japan’s three biggest banks, this month reported a ¥680 billion charge that was due in part to chasing higher yields on bonds overseas as opportunities dry up at home.

JGB traders aren’t faring much better either. Trading volumes have fallen dramatically in the bond market, which no longer serves Japan as an arbiter of economic risk, and jobs in the industry are declining.

Central banks that fail to revive inflation over many years could also face what Kuroda describes as a “deflationary mindset.”

After two decades of stagnation, Japanese consumers and businesses now look to the past as a better predictor of future prices than anything the BOJ does to nudge up inflation, undermining the effectiveness of monetary policy.

There is no telling when the BOJ may be able to provide its peers with lessons on exiting such a momentous stimulus program, but the path looks perilous.

Current central bank policy is keeping a lid on the yen, to the great benefit of exporters, and is allowing the hugely indebted Japanese government to keep borrowing cheaply.

Jerome Jean Haegeli, chief economist at the Swiss Re Institute in Zurich, said yield-curve control could turn out to be the “best of bad options” for other central banks that get in a bind and need to contain asset purchases, but at another cost.

“The downside of yield-curve control is an unholy marriage of the fiscal authority getting together with the monetary authority, and that in the end won’t go well,” he said.