Postponing Brexit Is Worse for U.K. Economy Than May’s Deal 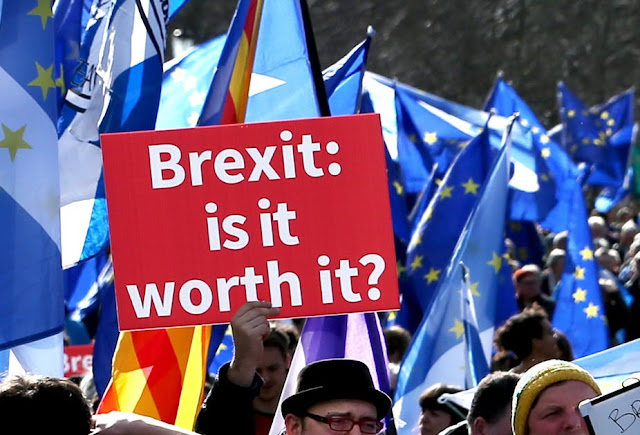 The prospect of a delayed Brexit may be pushing up the pound, but it’s not the best news for the U.K. economy.
Sterling has rallied above $1.30 this week amid increasing signs of support from lawmakers across Parliament for extending the negotiating period set to expire on March 29. While that would remove the imminent possibility of a chaotic no-deal scenario, it would leave the U.K. worse off than if Parliament accepted Prime Minister Theresa May’s current plan, according to economists.
Pushing back the departure prolongs the uncertainty that has already hit business investment and pushed consumer confidence to the lowest since 2013, according to JPMorgan Asset Management. Worse still, it would be unlikely to help the government reach any better outcome.
“Kicking the can down the road has a cost,” said JPMorgan AM global market strategist Mike Bell. “Time has a cost, dragging on growth.”
For Dan Hanson at Bloomberg Economics, it’s a question of how long the delay lasts. His uncertainty model suggests a three-month postponement could slow growth to 1.5 percent this year from his central projection of 1.7 percent -- which is based on some form of Brexit agreement being reached with the EU in time for a March departure. But six months would crimp it to 1.3 percent.
Beyond that time period, he sees a less clear impact as the cliff edge disappears from the view of businesses and households, potentially lifting some of the paralysis.