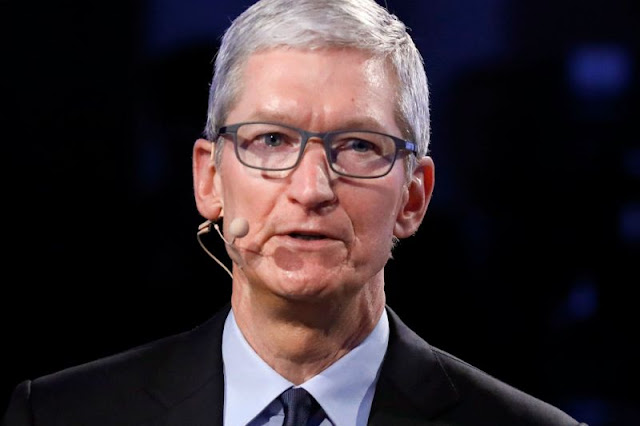 
The Dow Jones Industrial Average plunged over 650 points Thursday morning amid growing concerns that Apple's lackluster showing last quarter is only a sign of a coming downturn in the world economy.
Apple dropped more than 9%, marking its biggest intraday fall in 3 years and knocking 100 points off the Dow on its own. CEO Tim Cook told investors in a Wednesday letter that October-December revenue likely came to $84 billion -- 5% to 10% lower than previous projections.

"While we anticipated some challenges in key emerging markets, we did not foresee the magnitude of the economic deceleration, particularly in Greater China," he said.

The company, which boasts the third-largest market capitalization in the U.S. at $740 billion, has been struggling with sales of its newest iPhones. Cook's comments triggered a sell-off of related issues as well, with Broadcom dropping more than 5% at one point. Caterpillar fell by a similar margin amid concern that a Chinese slowdown could squeeze demand for construction machinery.

Fearing market turmoil, many investors shifted their money to the yen, a traditional safe haven, triggering a dramatic surge in the Japanese currency. The yen strengthened by 5 in one day to the 104 range against the dollar, marking the currency's strongest point since March 2018.

The White House tried to ease fears with a senior White House adviser expressing optimism about trade talks with Beijing. "If we have a successful negotiation with China, then Apple's sales and everybody else's sales will recover," White House Chairman of the Council of Economic Advisers Kevin Hassett said in an interview with CNN on Thursday.

"I think there are a heck of a lot of U.S. companies that have a lot of sales in China that are basically going to be watching their earnings be downgraded next year until we get a deal with China," Hassett said.
But analysts begged to differ, pointing precisely to the trade tensions as being the cause of the rough start to the year.

"Investors are expressing stronger concerns that the trade frictions between the U.S. and China have dealt a negative impact on the real economy, and that global economic conditions will decelerate this year," said Shingo Ide, chief equity strategist at Japan's NLI Research Institute.

Mizuho Bank chief market economist Daisuke Karakama said, "Over the next three months, concern about the trade war will linger and its impact will probably start to be felt in the real economy." He predicted that it will be difficult for the U.S. Federal Reserve to continue raising interest rates.

The VIX Index, which measures volatility in U.S. stock prices, gained 14% at one point Thursday, climbing above 26.

Signs of potential turmoil were already evident at the end of December. Investors had flocked to the dollar in the second half of 2018 on the strength of the American economy, even as Europe and China slowed down. But doubts over the U.S. economy and monetary policy grew toward the end of the year, pushing investors to unload the greenback.

The trend could accelerate as the benefits of U.S. President Donald Trump's tax cuts fade, and the trade war between the U.S. and China squeezes American businesses.

Algorithmic trading further accelerated the race to buy the Japanese currency, with individual investors and market speculators forced into buying yen to cut their losses.

Market watchers expect a bearish mood on the Tokyo Stock Exchange when it opens for the first time this year on Friday, returning from the New Year holiday. March futures for the Nikkei Stock Average fell below 19,300 Thursday on the Chicago Mercantile Exchange, over 700 points lower than the index's ending price for 2018.

"The market will gradually factor in the possibility that the global economy is entering a recession, driving stock prices down and the yen up," said Takenori Kiuchi of the Nomura Research Institute.

Japan's big corporations and manufacturers assume a rate of about 109 yen to the dollar for the fiscal year ending in March. "With the yen strengthening, markets have begun to price in the risk that Japanese companies' profits will decline in the year through March 2020," said Hiroshi Matsumoto of Pictet.

If the yen remains strong as companies start announcing October-December results toward the end of January, "they would not be upgrading their forecasts, and disappointed investors will drive the Nikkei index under 19,000," said Kengo Yamamoto at Norinchukin Zenkyoren Asset Management.