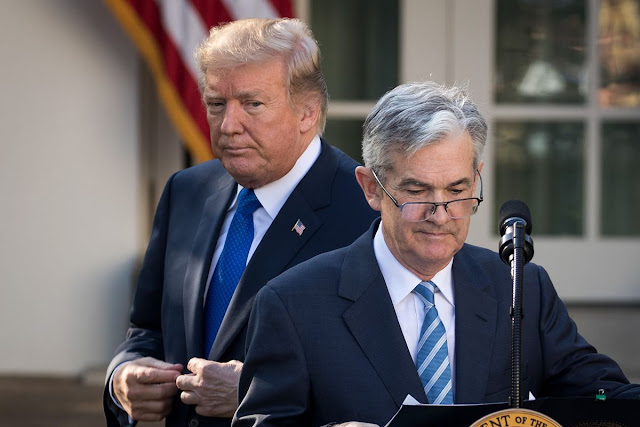 President Donald Trump said on Tuesday it would be a mistake if the Federal Reserve raises interest rates when it meets next week, as it is expected to do, continuing his criticism of the U.S. central bank.

“I think that would be foolish, but what can I say?” Trump told Reuters in an interview.


Trump said he needed the flexibility of lower interest rates to support the broader U.S. economy as he fights a growing trade battle against China, and potentially other countries.

“You have to understand, we’re fighting some trade battles and we’re winning. But I need accommodation too,” he said.
Trump named Jerome Powell as Fed chairman but has repeatedly railed against him since he took over as head of the U.S. central bank last February. Trump in August told Reuters that he was not “thrilled” with Powell’s raising interest rates.
Trump was more conciliatory in his comments about Powell on Tuesday, but still criticized the policies of the man he chose for the top Fed job.
“I think he’s a good man. I think he’s trying to do what he thinks is best. I disagree with him,” Trump said. “I think he’s being too aggressive, far too aggressive, actually far too aggressive.”
When asked whether he was concerned there might be a recession when he was running for re-election in 2020, Trump noted that other factors in the world could affect the economy, including Britain’s plans to leave the European Union, known as Brexit, and the unrest in France.
“Well, you have problems in the world, like Brexit, like France - a big problem in France. It’s shocking to see what’s going on in Paris,” Trump said, referring to anti-government protests that have targeted his French counterpart, President Emmanuel Macron.
Macron this week made major concessions to try and quell the protests that have rocked France, announcing wage increases for the poorest workers and a tax cut for most pensioners.
“Are we heading for a recession?” Trump said. “In my opinion, we are doing really well. Our companies are doing really well. If the Fed is going to act reasonably and rationally, I think we’ll go - I think we are a rocket ship going up.”