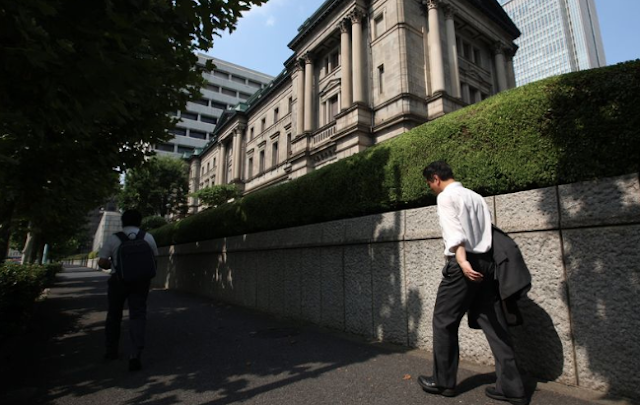 It’s been the most radical cash injection in history -- a staggering $3.5 trillion, pumped into Japan’s economy over more than five years to slay deflation and kick growth into a higher gear.
That’s still not enough to save Tomoaki Nagai’s metal parts factory near Osaka and it’s a similar story throughout the world’s third-largest economy.
North of Tokyo, Hiroyuki and Machiko Hayashi of Utsunomiya worry about Hiroyuki’s lack of job security as a wedding photographer. And in Akita, taxi driver Takeshi Kikawa struggles to make ends meet when interest rates on low-risk investments are near zero.
Their stories and those from two dozen interviews with young couples, factory owners, financial planners and taxi drivers from Akita to Okinawa reveal a sobering reality for Prime Minister Shinzo Abe’s Abenomics revival plan: The BOJ’s massive monetary experiment just hasn’t been the game-changer Governor Haruhiko Kuroda was tasked to deliver.
True, some people are breathing a bit easier. Since Kuroda launched the BOJ’s radical stimulus, the economy has grown around 1.2 percent annually, moderately better than its potential rate. The yen’s steep fall versus the dollar, which exceeded 60 percent from its strongest level, has helped the Toyotas of the world, pushing corporate profits to record levels and, earlier this year, stocks to 27-year highs. Worker pay adjusted for inflation has fallen 0.7 percent a year -- which is actually progress after years of declining nominal pay.
But the Japanese people’s "deflationary mindset," partly a result of the dark cloud cast on their economic future by an aging and shrinking population, has proved too tough to overcome. As the focus turns to its end game even though inflation remains only halfway to its 2 percent target, the BOJ’s ultimate job -- selling a growth story to the Japanese people -- remains unfinished.