Sterling rises on Brexit deal hopes; dollar dips across the board 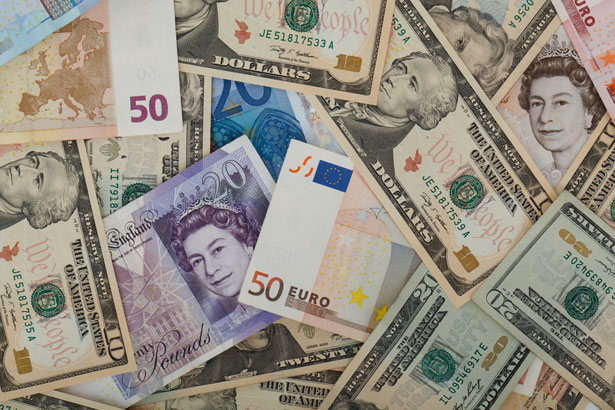 The British pound logged its best day in eighteen months on Thursday, following reports that London is close to sealing a financial services deal with Brussels, and as the Bank of England kept interest rates steady but hinted future interest rate rises would be slightly faster if Brexit goes smoothly.

On a day marked by broad dollar weakness, the greenback slipped across the board, retreating sharply from a 16-month high hit on Wednesday.
A British official said London was close to agreeing on a deal giving UK-based financial services firms basic access to European Union markets. The British government and EU officials later played down the chance of an imminent deal.

Sterling added to gains following a Financial Times report that the European Union is weighing a compromise on a plan for Northern Ireland that would give Britain stronger guarantees that a customs border would not be needed along the Irish Sea.

More broadly, the dollar index, a gauge of the greenback’s value versus six major peers, fell 0.88 percent to 96.27, its lowest in more than a week.

“The dollar is certainly under pressure across the board and against G7 currencies in particular,” said Dean Popplewell, vice president of market analysis at OANDA in Toronto.

“It’s been a good move by the U.S. dollar over the past month or so and I would think there was a lot of squaring up and rebalancing of portfolios over the last 36 hours,” he said.

The index rose 2 percent for the month of October, its best monthly performance since May.
“I believe some individuals who have been long the dollar for quite some time want to take some profit off the table ahead of nonfarm payrolls,” Popplewell said, referring to October’s U.S. employment report, scheduled for release on Friday.

Hopes that China would ramp up fiscal stimulus boosted the Australian dollar, seen as a barometer of investor sentiment. The Aussie was up 1.88 percent, also helped by data showing a strong rise in Australia’s trade surplus.

The New Zealand dollar, which slipped 1.5 percent in October, started November on a firm footing and was up 2.15 percent. The Canadian dollar strengthened against its U.S. counterpart on Thursday.

China’s yuan edged off a 10-year low on Thursday to end at 6.9496 per dollar, its highest onshore close in nearly a week.

U.S. President Donald Trump in a tweet on Thursday said he had a “very good” talk with Chinese President Xi Jinping on trade and North Korea and that the two planned to meet at the upcoming G-20 summit.