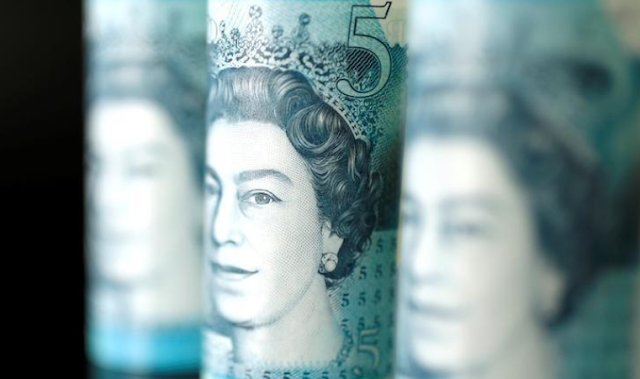 Sterling won’t move much in the run-up to Britain’s departure from the European Union in March next year but will gain ground on the U.S. dollar afterwards, a Reuters poll of foreign exchange strategists predicted.

As foreseen in numerous Reuters polls, the pound sank after the surprise June 2016 referendum result when Britons voted to part ways with the EU.

But three-quarters of over 50 respondents to an extra question said sterling is unlikely to set a new post-Brexit vote low before the country leaves the political and economic bloc it has been a member of for more than four decades in March 2019.

The Bank of England will raise interest rates to 0.75 percent in August, according to a Reuters poll last month that also gave only a median 20 percent chance of a hard Brexit - an outcome that would be negative for sterling.

The U.S. Federal Reserve has already raised rates seven times from near-zero over the past few years to 1.75-2.00 percent and is expected to raise them twice more this year and several more next year.

“While a rate hike will help provide some support for the pound, the period of Brexit uncertainty (even assuming some progress in July) is likely to persist going forward, which is likely to limit the extent of sterling appreciation in 2018,” noted analysts at MUFG.
“Still, we continue to expect a deal to be reached this side of Christmas which will see a more notable period of GBP appreciation.”

Since the referendum result, the pound has swung wildly. It reached a post-referendum high above $1.43 in April before hopes of a May rate hike from the BoE were dashed. On Thursday, cable was trading around $1.32.

While there may be volatility in between, the median forecast in the wider poll of around 70 strategists taken this week was for it to have moved little from there in three and six months.

In a year from now a pound will be worth more, $1.39. While that is just a touch weaker than the $1.41 predicted in June it is well below a recent high above $1.43, and nearly 10 cents below where it was just before the referendum result over two years ago.

The latest predictions for sterling are part of broader expectations in the wider Reuters poll for the U.S. dollar to weaken after a run-up earlier this year.

Against the euro, the pound will barely move, the poll predicted. On Thursday a euro was worth 88.2 pence and in a year’s time it will get you 88.0p.

Later on Friday, British Prime Minister Theresa May will make a last-ditch attempt to unite her divided government on what kind of relationship with the EU it wants.
May is under increasing pressure from EU officials, companies and some lawmakers to move forward with negotiations to leave the EU, a departure that will mark Britain’s biggest trading and foreign policy shift in almost half a century.