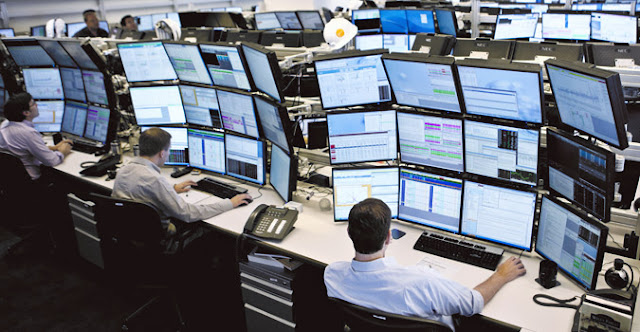 Newer financial trading firms are expanding the volume of foreign exchange they trade in a market traditionally dominated by the big banks, industry data and rankings show.


The share of non-bank market-makers in the spot currency business has risen to around a third in recent years as changes in the industry opened the door for more players to compete.
Global banks vie to profit by buying and selling currencies in the $5 trillion-a-day market (£3.78 trillion), still the world’s largest.

But regulations introduced after the 2008-09 financial crisis have curbed some bank activity, while the majority of forex is now processed on ultra-fast electronic platforms rather than the telephone.
That has helped firms such as London-based XTX Markets and U.S. high-speed traders like Citadel to compete on price and speed by investing in their own technology, with most targeting the lower-margin spot business.

Average daily non-bank trading volumes in the spot market rose to $575 billion (£435 billion) last year, up from $200 billion in 2015, according to Boston-based consulting firm Aite Group. It projected that this could rise further to $675 billion this year based on broader forex trading volume growth.

The non-bank firms took a market share of 29 percent in 2016, up from 21 percent in 2010, Aite said, cautioning that in the relatively opaque FX market its numbers were estimates and may include traditional fund managers inadvertently acting as market-makers.

“They (non-banks) have started from scratch. They compete on price and speed and they don’t have any of the legacy technology that banks do,” said Frank Feenstra, managing director, markets at consulting firm Greenwich Associates.

Feenstra believes the share of the biggest banks, which in currencies include JP Morgan, UBS, Citi and HSBC, has held up relatively well and it was smaller lenders that were losing out.
“Sometimes the relationship between banks and non-banks is more symbiotic than adversarial. But the market share has to be coming from somewhere,” he said.

Bank trading executives play down the threat of newer traders. After steady gains non-banks’ share of volumes has plateaued, they argue, while in the more lucrative forex swaps markets they have made very little headway.

The Bank of England said this week that non-bank non-dealer financial firms took a 39 percent share of April’s $751 billion in London spot forex volumes. That’s close to the same level as the last two years, and down slightly on 2015.

Non-banks took six of the top 50 places in Euromoney’s 2018 FX Survey, an annual ranking of market-makers in currencies. XTX more than doubled its market share to 7.3 percent, making it the third-biggest behind JP Morgan and UBS.

Many in the industry are predicting more consolidation. “The more and more commoditised something gets, the more price is the only thing that matters. You are going to see fewer and bigger (FX market-makers),” said Andrew Smith, an executive at New York high-speed trading firm Virtu Financial.

As well as competing with high-speed traders, banks are increasingly partnering with their market-making arms, using them for liquidity while selling their clients other currency products.