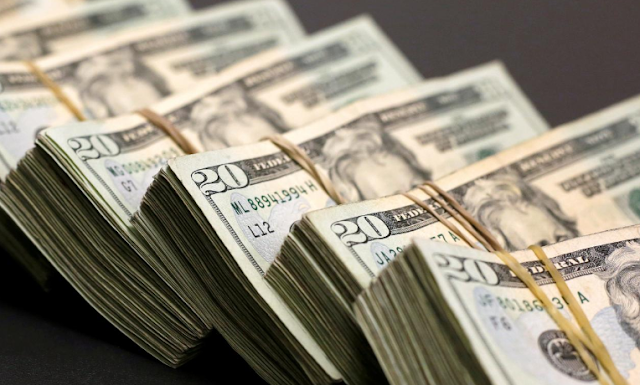 The dollar slipped against a basket of currencies on Friday as data showing the U.S. economy rang up its strongest quarter in nearly four years failed to erase worries that trade frictions would be a drag in the second half of 2018.

The euro stabilized following its biggest one-day loss in a month in reaction to the European Central Bank on Thursday reaffirming its plan to slowly end its accommodative monetary policy.
The greenback gave up initial gains after the U.S. government reported gross domestic product grew at a 4.1 percent annualized pace in the second quarter, matching the median forecast among economists polled by Reuters.

Growth accelerated from a revised 2.2 percent clip in the first three months of the year.
After hints from U.S. President Trump and other government officials in recent days of a strong GDP reading for the second quarter, “the market is well versed in a strong number,” said Alan Ruskin, global head of currency strategy in Deutsche Bank in New York.

The GDP, while strong on an annualized basis, was less impressive on a year-over-year basis, coming in at 2.8 percent. This was slower than an expected 3.1 percent pace, Ruskin said.
At 10:51 a.m. (1451 GMT), an index that tracks the dollar versus the euro, yen, sterling and three other currencies .DXY was down 0.07 percent at 94.677.

The single currency steadied after falling more than 0.7 percent on Thursday in response to the ECB sticking to ending its 2.6 trillion euro stimulus program this year and keeping rates at a record low level through the summer of 2019.

That came after the euro rallied on relief about the United States and the European Union agreeing to begin talks to lower tariffs.

China's yuan was heading for its longest weekly losing streak since November 2015. It CNY= fell to a 13-month low at 6.8369 per dollar.

The yuan has been under sustained pressure since Trump threatened to impose tariffs on all imports from China.

The United States and China presented radically different visions of Beijing’s economic model at the WTO on Thursday, with Washington’s ambassador criticizing “the world’s most protectionist economy” and his Chinese counterpart describing a U.S. report as “half-cooked.”