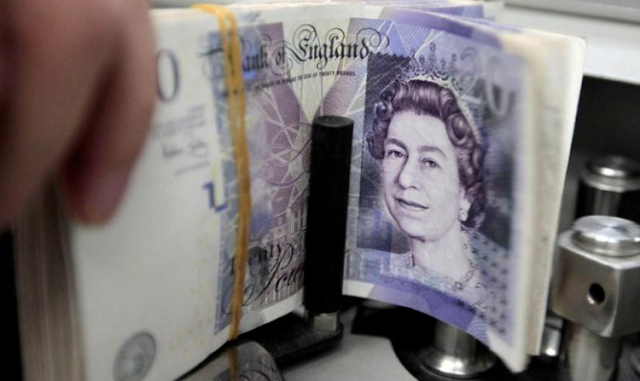 The pound rose to a six-day high on Friday after a Bank of England meeting revived expectations of a rate hike this year, but fears of a breakdown in Brexit talks next week limited sterling’s gains.


The British currency has struggled through much of June, weighed down by worries about a slowdown in the economy and fraught attempts by British diplomats to secure a deal to exit the European Union in March.

Sterling rallied on Thursday, though, when the Bank of England’s chief economist unexpectedly voted for an interest rate hike.

The central bank kept interest rates on hold but the decision by Andy Haldane to join two other policymakers in calling for rates to rise to 0.75 percent lifted the pound off a seven-month low as expectations grew that the BoE could tighten policy in August.

The upbeat outlook for interest rates and a weaker dollar on Friday helped sterling climb half a percent to a six-day high of $1.3312 in early European trading.
The pound later gave up most of those gains to trade at $1.3264 and the currency remains almost 8 percent below a post-Brexit referendum high hit in April.

The pound on Friday fell versus a broadly stronger euro to 87.75 pence.
Markets now see a nearly 50 percent likelihood of the BoE raising interest rates in August by 25 basis points and a 90 percent chance of a rate hike happening by the end of 2018.

“The BoE may prefer to act sooner rather than later given Brexit uncertainties may intensify later this year and make a November rate hike difficult,” analysts at MUFG said.

Nine months before Britain’s exit from the EU, the country seems to be trapped in a period of relatively low growth. In the first quarter of 2018, the economy grew by just 0.1 percent, the slowest rate since 2012.

Some market observers say the pound could rise in the coming weeks if economic data suggests any turnaround in the economy because it would help cement expectations of a rate hike.

But an EU summit on June 28-29 at which Britain is hoping to make progress in securing a favourable Brexit deal with the EU could hurt sterling, strategists say.

Prime Minister Theresa May is struggling to find a proposal on post-Brexit customs arrangements - the biggest stumbling block so far in exit talks - to take into negotiations with Brussels.

“For now I would focus more on the EU summit than the Bank of England’s August meeting. I expect the summit to be harsh on Britain and for GBP to fall next week as a result,” said ACLS analyst Marshall Gittler.