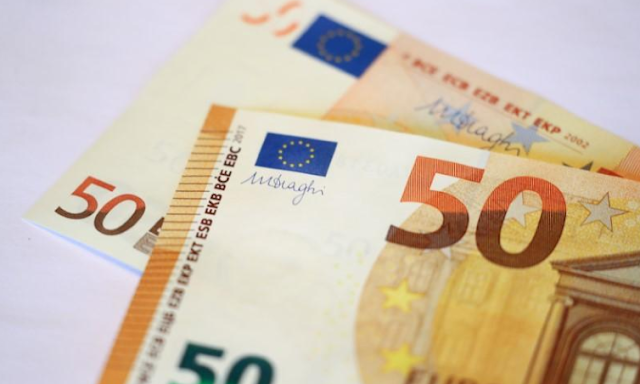 The euro rose on Monday as traders turned their attention away from a crisis in Italy and a divisive G7 summit towards a European Central Bank (ECB) policy meeting that could signal the beginning of the end of the bloc’s vast economic stimulus.

Investors are raising their bets that the ECB will signal on Thursday a winding down of its vast bond-buying programme by the end of this year following a flurry of hawkish comments by officials last week.

Market optimism ahead of Thursday’s ECB meeting was reinforced by assurances from Italy’s new coalition government that it does not intend to leave the euro or issue securities to pay off companies owed money by the state.

Investors had viewed the latter — effectively a plan for a parallel currency in Italy — as a first step to exiting the euro.
“The comments calmed fears but let’s wait for Italy’s policy actions this summer, that will determine the market,” said MUFG currency strategist Lee Hardman.
The euro gained half a percent to $1.1816 towards a two-week high of $1.1840 touched on Thursday before losing some momentum as the dollar strengthened broadly.

The euro bounced despite heightened worries about a global trade war following a dispute at the Group of Seven summit in Canada that laid bare a rift between U.S. President Donald Trump and other leaders over automobile tariffs and other issues.

Trumped lashed out at Canada and Europe over the U.S. trade deficit after he arrived in Singapore, where he is due to hold a historic meeting with North Korean leader Kim Jong Un on Tuesday.
The Canadian dollar, which has been dogged by fears that Trump may scrap the North American Free Trade Agreement (NAFTA), fell 0.4 percent to C$1.2982.

Analysts said that the fairly muted reaction in currencies reflected the low expectations markets had for the G7 summit despite the fact that the euro is sensitive to the threat of U.S. tariffs on cars.
“The overhang of global trade wars is still very much alive but the global FX price action this week will be driven by a stream of other key events,” said Viraj Patel, a currencies analyst at ING.

Investors are ready for more volatility before a confluence of big events this week, including the Trump-Kim summit, policy reviews by the world’s three major central banks, and a UK parliamentary Brexit bill vote. (For a Factbox, see)

Easing Italian political concerns and speculation the ECB will announce on June 14 when it will unwind its bond purchasing programme put the dollar under pressure last week as the euro bounced back from 10-month lows.

Before the ECB meeting, the U.S. Federal Reserve is almost unanimously expected to raise interest rates for the second time this year on Wednesday. The market’s focus will be on the Fed’s projection on the path of future interest rates.

“I would think a forecast of four rate hikes this year would be already priced in. But if the Fed suggests faster rate hikes in 2019 than previously anticipated, that could destabilise the market,” said Ayako Sera, market economist at Sumitomo Mitsui Trust Bank.

Elsewhere the Swiss franc weakened nearly 0.3 percent to 1.162 francs to the euro after voters rejected a plan to transform Switzerland’s financial landscape.

A Sovereign Money initiative barring commercial banks from electronically creating money when they lend was rejected by more than three quarters of voters in a referendum on Sunday.