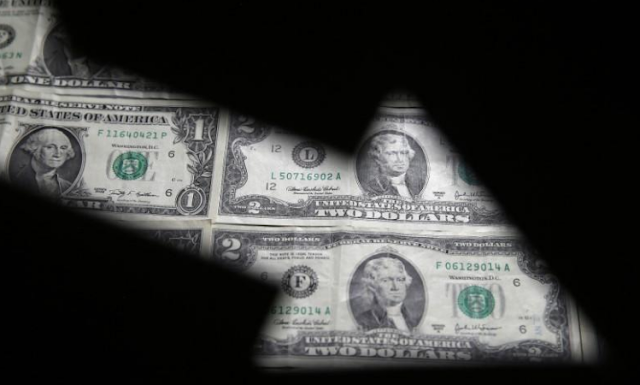 The dollar fell on Monday, dropping versus the yen for a third straight session, as China imposed extra tariffs on U.S. products, escalating a dispute between two of the world’s biggest economies.


Volume was light as some European markets were closed for the Easter Monday holiday.
China has slapped extra tariffs of up to 25 percent on 128 U.S. products including frozen pork, as well as on wine and certain fruits and nuts, in response to U.S. duties on imports of aluminium and steel, China’s finance ministry said.
The tariffs, to take effect on Monday, match a list of potential tariffs on up to $3 billion in U.S. goods published by China on March 23.
“The yen and Swiss franc are the real winners,” said Paresh Upadhyaya, director of currency strategy, at Amundi Pioneer Asset Management in Boston.
“It’s an equity induced sell-off triggered by trade concerns. Those concerns raise worries about global growth. There’s more of a risk premium built in for the euro as well as other export-oriented currencies like the Canadian, Australian and New Zealand dollars.”
The Japanese and Swiss units, typically viewed as safe- haven currencies, tend to benefit at the dollar’s expense in times of geopolitical and financial tensions.
The Swiss franc traded slightly lower against the dollar, but it has been catching up as U.S. stocks accelerated their sell-off.
In late trading, the dollar was down 0.1 percent at 90.043 against a basket of six major currencies, backing off from a one-week high of 90.178 set last Thursday.
The greenback fell 0.4 percent versus the yen to 105.89 yen , after rising more than 1.5 percent last week for its biggest weekly gain since September 2017.
The dollar rose against the yen through most of last week, helped by signs China and the United States were working behind the scenes to avoid a full-blown trade war.
The greenback is expected to struggle further against the yen given the tension between the world’s two largest economies.
The Trump administration is expected to release a list of other products to be targeted with tariffs by Friday.
Beyond the potential trade war, investors are also focused on U.S. data this week, led by the non-farm payrolls report for March. The reports should determine the path for future interest rate increases, analysts said.
The euro, meanwhile, was down 0.2 percent at $1.2304, weighed down by overall caution in the market amid a U.S. equities sell-off.