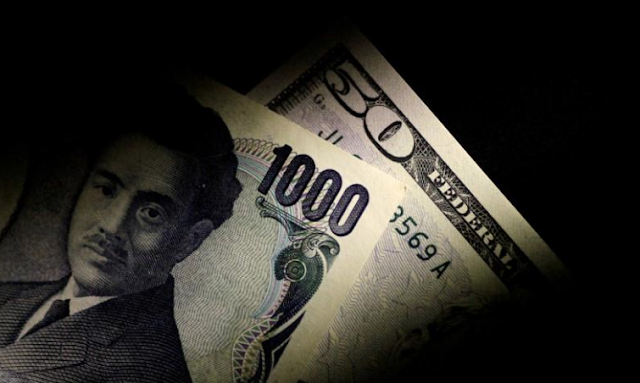 The dollar held steady against the yen on Monday, taking a breather after last week’s rally and as it treads cautiously amid lingering concerns over a U.S.-China trade spat.


The dollar last traded at 106.32 yen, after having risen more than 1.5 percent last week for its biggest weekly gain since September 2017.
The U.S. currency had risen against the yen last week, helped by signs China and the United States were working behind the scenes to avoid a full-blown trade war, and hopes for a diplomatic breakthrough over North Korea’s nuclear programme.
The resulting uptick in risk appetite weighed on the safe-haven yen, a currency that tends to rise during times of market turmoil and vice versa.
Given the simmering U.S.-China trade tensions, however, some analysts say the dollar’s gains against the yen may be limited in the near term.
China has slapped extra tariffs of up to 25 percent on 128 U.S. products including frozen pork, as well as on wine and certain fruits and nuts, in response to U.S. duties on imports of aluminum and steel, China’s finance ministry said.
The tariffs, to take effect on Monday, match a list of potential tariffs of up to $3 billion (£2.1 billion) in U.S. goods published by China on March 23.
Markets haven’t shown much reaction to China’s announcement so far, partly because Beijing had already warned of such measures, said Satoshi Okagawa, senior global markets analyst for Sumitomo Mitsui Banking Corporation in Singapore.
“However, if Chinese equities were to fall on this factor, we could see a general risk-off move,” Okagawa said, adding that the performance of stock markets would be key.
Asian equities showed resilience on Monday, starting the new quarter with mild gains after a strong performance by global equities last week.
Analysts say another focus is the potential for foreign investment by Japanese institutional investors at the start of Japan’s new financial year.
Sumitomo Mitsui Banking Corporation’s Okagawa said Japanese investors will probably increase their allocation to overseas assets, at least to some extent, which will support the dollar.
“Still, it’s probably going too far to say that the dollar will head up towards 110 yen in April because of such fresh buying,” Okagawa added.
Against a basket of six major peers, the dollar last stood at 89.971, having backed off from a one-week high of 90.178 set last Thursday.
The euro held steady at $1.2321.
Although expectations of an exit from the ECB’s stimulus had boosted the euro since last year, the common currency has been in a holding pattern since hitting a three-year high of $1.2556 on Feb. 16, with its March 1 low of $1.21545 seen as an immediate support level.
Elsewhere, some emerging Asian currencies edged higher, with the Malaysian ringgit rising to as high as 3.8550 per U.S. dollar, reaching its firmest since April 2016.
Recent declines in U.S. long-term bond yields seem to be providing support to emerging Asian currencies, even though there are lingering risks such as those related to U.S. trade issues, said Teppei Ino, an analyst for MUFG Bank in Singapore.
“Asian currencies are unlikely to see a slump unless there is a full-blown, one-way move toward risk aversion,” Ino said.
The U.S. 10-year Treasury yield last stood at 2.764 percent, after having set a seven-week low of 2.739 percent on Thursday.