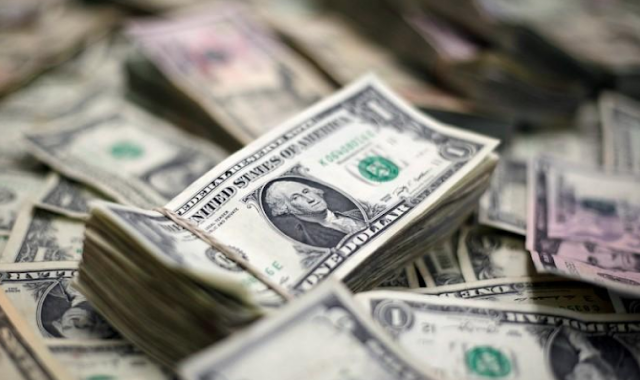 The dollar fell against a basket of currencies on Monday, on persistent worries about a potential trade conflict between the United States and China and as the euro rose following comments from European Central Bank President Mario Draghi that were deemed supportive of the common currency.


The dollar index .DXY, which measures the greenback against a basket of six other major currencies, was down 0.3 percent at 89.842, after slipping to low of 89.818, its weakest since March 28.
“I think some of this is related to trade war tensions. That theme has been coming and going these past few days,” said Brad Bechtel, managing director FX at Jefferies, in New York.
Global markets took a hit last week as U.S. President Donald Trump upped the ante in a trade dispute with China, reviving investor jitters about the impact a tariff war could have on the world economy.
China is evaluating the potential impact of a gradual yuan depreciation as a tool in the escalating trade dispute with the United States, Bloomberg News reported on Monday, citing people familiar with the matter.
The report, which led the yuan to give up early gains against the U.S. dollar, added a layer of uncertainty in currency markets and had some spillover effects in emerging market currencies, Bechtel said.
Meanwhile, the euro EUR= was up 0.32 percent against the greenback. A slide in stock markets this year has not materially impacted eurozone financial conditions, European Central Bank President Mario Draghi said on Monday, suggesting that policymakers remain calm about the recent market volatility.
While Draghi’s comments were not materially a surprise, analysts said the move in the euro may have been exaggerated in a thin market which is expecting some more clarity on the trade war front when President Xi Jinping speaks at the Boao Forum for Asia in the southern province of Hainan on Tuesday.
“Draghi’s comments were a bit more supportive of the euro than what he signaled at the ECB press conference and markets are clutching at that,” said Viraj Patel, an FX strategist at ING Bank in London.
Sterling climbed against the dollar and the euro, boosted by data showing British house prices rose more than expected in March. Sterling was up 0.29 percent at $1.4131.
The greenback was 3.79 percent higher against the rouble RUB= after the United States hit Russian companies and officials as part of a round of new sanctions against Moscow.
The loonie CAD= rose against its U.S. counterpart following the release of a report by the Bank of Canada that said Canadian companies remain optimistic about sales growth despite trade uncertainties, reinforcing expectations of further interest rate hikes down the line.