Despite slowing U.S. growth, dollar on track for best week since 2016 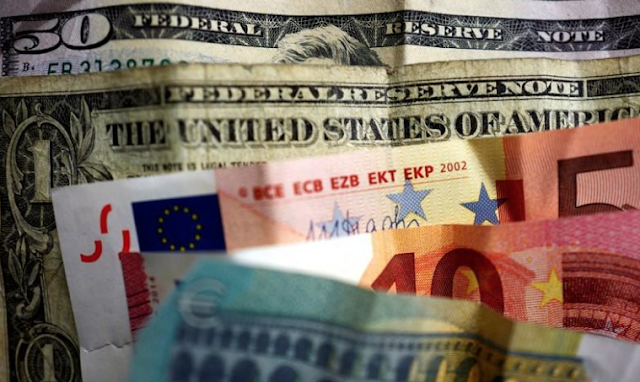 The dollar held steady on Friday despite a government report showing slower U.S. first-quarter economic growth, with the currency on track to end its strongest week since November 2016, having gained 1.4 percent.


On Tuesday, the U.S. benchmark government bond yield broke through the psychologically significant 3 percent level for the first time in more than four years as investors reduced their U.S. bond holdings on worries about rising inflation and growing government debt supply.
While Friday extended the week’s gains, the dollar’s move was muted by comparison, last up just 0.1 percent at 91.671 against a basket of six currencies, though still its highest since Jan. 12.
“The market’s taking a bit of a breather after some significant moves over the better part of last week,” said Omer Esiner, the chief market analyst at Commonwealth Foreign Exchange Inc, in Washington D.C.
The U.S. economy slowed in the first quarter as consumer spending grew at its weakest pace in nearly five years, the Commerce Department reported. But the setback may be temporary against the backdrop of a tightening labor market and large fiscal stimulus.
“Based on the incoming data, you would say the market is a bit disappointed. The big question the market is deciding is whether this run-up to 3 percent – and the oil prices and inflation expectations that were driving it – is sustainable,” said Steven Englander, head of research and strategy at Rafiki Capital Management in New York.
While the dollar has ignored yield differentials for more than a year, with investors preferring to give greater weight to the momentum of economic recovery in other major economies, notably Europe, this week’s spike in 10-year U.S. Treasury yields forced investors to acknowledge the widening yield differentials favoring the greenback.
“We’re coming to a point now finally where the market is focusing more on the dollar’s widening yield advantage over its major rivals, which has been in place for some time but has been largely ignored by investors,” said Esiner.
Sterling was the biggest loser among major currencies on Friday as weaker-than-expected first-quarter growth numbers further whittled away at the likelihood of a rate hike next month.
The pound fell as low as $1.375 against the dollar, more than 1 percent weaker, after data showed Britain’s economy grew at its slowest pace since the fourth quarter of 2012.
Against the yen, the dollar rose to a top of 109.53 yen on Friday, the highest level since Feb. 8.


The euro, in which speculators held record long positions, fell to $1.205 on Friday, its lowest since Jan. 12.