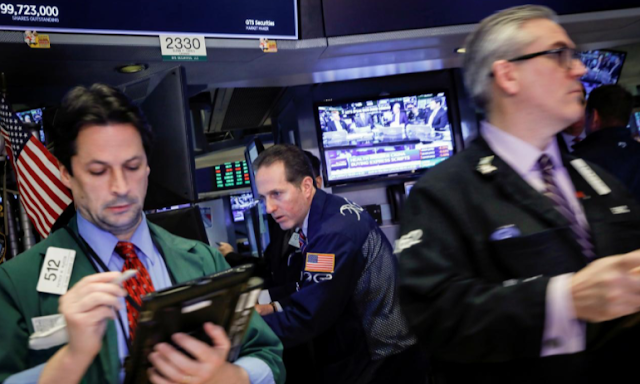 
Wall Street’s main indexes closed up nearly 2 percent on Friday after data showed U.S. job additions in February grew by a strong clip but wage growth was sluggish.
“The market was particularly optimistic that wage growth wasn’t too hot for fear of inflationary concerns,” said Andre Bakhos, managing director at New Vines Capital LLC in Bernardsville, New Jersey.
Traders of U.S. short-term interest-rate futures kept bets the Federal Reserve will stick to three rate hikes this year.
A month ago, the markets were gripped by fears of higher wages leading to price pressures, triggering a selloff that dragged the main indexes to correction territory.
However, the S&P and the Dow have nearly reclaimed those losses. The S&P 500 .SPX is just 3 percent below the record highs hit on Jan. 26 and the Dow .DJI is 4.8 percent away from its peak.
Rapid gains in technology stocks have already powered the Nasdaq .IXIC back to its record levels.
“We’re seeing some positive follow through, but it would not surprise me to see some profit-taking coming off a very powerful performance on Friday,” Bakhos said.
Last week’s gains were also supported by U.S. President Donald Trump’s softer stance on his decision to impose import tariffs on steel and aluminum by exempting Canada and Mexico.
At 8:39 a.m. ET, Dow e-minis 1YMc1 were up 43 points. S&P 500 e-minis ESc1 rose 5 points and Nasdaq 100 e-minis NQc1 gained 27.5 points.
Investors will pore over the next round of data on consumer prices and retail sales due this week for signs of rising price pressure.
Broadcom (AVGO.O) rose 3 percent in premarket trading, following report that Intel (INTC.O) was considering a possible bid for the company.
Oclaro (OCLR.O) jumped 25 percent and was the most traded stock premarket after laser and optical fiber specialist Lumentum Holdings (LITE.O) said it would buy the optical components producer for $1.7 billion.
Lumentum’s shares rose 1 percent.