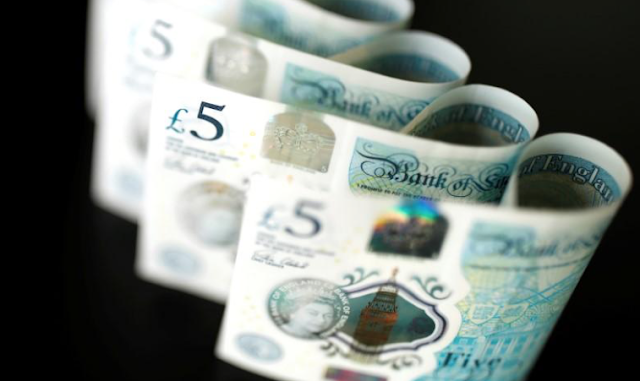 Sterling struggled to make headway on Friday after official data showed British industry kicked off 2018 in low gear and traders waited to get more clarity on Britain’s Brexit negotiations with the European Union.


The pound slid 0.1 percent against the dollar to $1.3808, weakening slightly after industrial and construction data were released. Sterling traded flat versus the euro at 89.14 pence per euro.
Analysts said that with predictions of a Bank of England interest rate hike for May baked into the price, and ongoing political risks around Brexit negotiations, assessments of the health of the UK economy have taken a backseat for currency investors.
“The market is quite happy for there to be a rate hike in May. With that in the price, it dampens the impact of economic data,” said Jane Foley, FX strategist at Rabobank. “The focus is on politics right now.”
European Council President Donald Tusk said on Thursday the Brexit negotiations risk stalling if Britain does not present a realistic solution for the future of the Irish border, after London rejected an EU fallback proposal last week.
The EU this week also rebuffed Britain’s post-Brexit trade demands and offered banks no special deal, underlining how far the two sides have to go before they can secure a trade accord.
Britain has said it will announce a transition deal - which will buy Britain and the EU time to decide their future relationship - later this month at an EU leaders summit.
But many investors remain sceptical that this can happen so soon. That uncertainty has weighed on sterling after the currency rallied at the start of the year. Sterling has fallen 1.2 percent against the dollar this week.
“GBPUSD is struggling to rally meaningfully at the moment,” said Michael Hewson, chief analyst at CMC Markets.