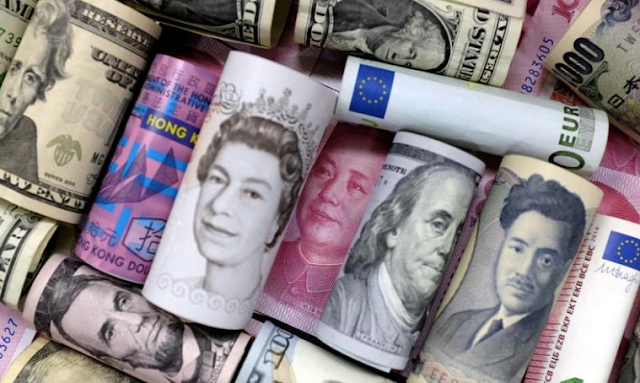 The dollar fell against most major currencies on Tuesday after U.S. inflation data for February came in line with expectations, suggesting the Federal Reserve remained on track to raise interest rates at a gradual pace.


The dollar also lost traction after U.S. President Donald Trump fired Secretary of State Rex Tillerson and replaced him with Central Intelligence Agency Director Mike Pompeo, marking the biggest shakeup of the administration’s Cabinet.
Investors were bracing for a breakout number in U.S inflation after a strong figure the previous month and when that did not happen, the dollar pared some of its gains against the yen and fell versus the euro, said John Doyle, director of markets at Tempus Consulting in Washington.
The Labour Department said on Tuesday the U.S. consumer price index rose 0.2 percent last month after jumping 0.5 percent in January. Excluding the volatile food and energy components, the CPI gained 0.2 percent after accelerating 0.3 percent in January.
“Today’s unsurprising print should serve to confirm the central bank’s commitment to gradualism, keeping markets in a much-appreciated‘Goldilocks’ phase for a little longer,” said Karl Schamotta, director of global product and market strategy at Cambridge Global Payments in Toronto.
After the data, Fed funds futures data showed a lower chance of a fourth rate hike this year.
In midmorning trading, the dollar index fell 0.1 percent to 89.809, as the euro gained 0.2 percent on the day to $1.2363.
The dollar also slid against the Swiss franc and the British pound, as well as the Australian and New Zealand dollars.
Tillerson’s firing, coming a week after the resignation of U.S. economic adviser Gary Cohn, also weighed on the dollar.
“It’s another sign of a problem in the Trump administration,” said Stan Shipley, strategist at Evercore ISI in New York.“The turnover in this administration is high, so this is another one.”
The greenback, however, did well against the yen, rising 0.5 percent to 106.90.
The yen came under some pressure from a scandal involving Prime Minister Shinzo Abe. It weakened by 0.3 to 0.5 percent against other major currencies after Japan’s ministry of finance said on Monday it altered documents for a sale of state-owned land linked to Abe’s wife.