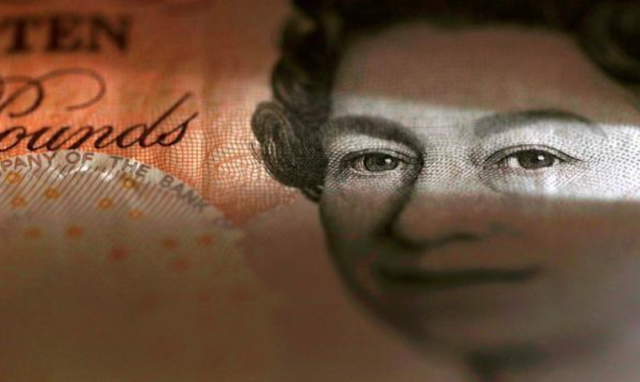 Sterling slipped back towards a three-week low against the dollar on Monday, weighed down by uncertainty among investors over whether Britain would succeed in securing a post-Brexit transition period.


The pound skidded on Friday after the EU’s chief Brexit negotiator Michel Barnier warned a transition deal was far from assured.
Those comments, as well as broad strength in the dollar amid a sharp stock market sell-off, handed sterling its biggest weekly, falls since October, as investors worried that Britain could leave the European Union in a disorderly manner.
The pound’s losses came despite a surprisingly hawkish policy meeting from the Bank of England, which said interest rates could rise sooner and by a bit more than investors were expecting.
Markets moved to price in a 70 percent chance of a rate hike in May after the meeting, and sterling jumped by more than 1 percent against the dollar and euro, but its gains were short-lived.
The fact that markets had now largely priced in two rate hikes by the end of the year, and that bets on the pound strengthening - or “long” positions - are at their highest in around 3-1/2 years makes sterling more vulnerable to bad news than good, said Nomura currency strategist Jordan Rochester.
“The Barnier comments were the wake-up call to markets that political risk remains,” he said.
The pound slipped 0.2 percent to $1.3798, close to Friday’s three-week low of $1.3764. It was also 0.3 percent weaker against the euro at 88.82 pence.
Michael Hewson, analyst at CMC Markets, said inflation data due on Tuesday would be important in determining sterling’s direction, and that wages numbers due next week would be even more crucial as they would help shape the market’s expectations for when and how fast the BoE would raise interest rates.
The pound has climbed more than 3.5 percent against the dollar over the past two months, on the back of perceived progress on talks with the EU on what a future relationship between the two will look like when Britain leaves in 2019, as well as some cautious optimism on the economy.
But it is now down almost 4 percent since hitting an 18-month high in late January.
“If a transitional agreement is not reached in the coming months, the BoE would be less likely to follow through on their plans to raise rates in May, although Governor (Mark) Carney did not go as far as to completely rule out a hike in that scenario,” said Derek Halpenny, head of European market research at MUFG.


“We still believe that securing a transition deal is the most likely outcome, although the risk of a renewed period of pound weakness would increase if the UK government drags its heels in the coming weeks and months.”