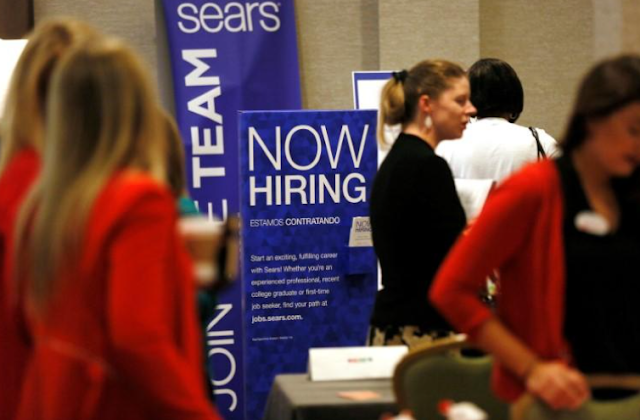 
Other data on Thursday showed a third straight weekly rise in first-time applications for unemployment benefits, though that probably reflected volatility around the end-of-year holidays.
The Labor Department said claims data for some states, including California, Massachusetts, North Carolina and Virginia, had been estimated. The labor market is near full employment, with the jobless rate at a 17-year low of 4.1 percent.
“Higher jobless claims are not signaling a slowdown in the economy, that’s for sure,” said Chris Rupkey, chief economist at MUFG in New York. “The labor market looks strong and the outlook for 2018 is even better.”
The ADP Research Institute said private payrolls increased by 250,000 jobs in December, the biggest gain since March, and well above economists’ expectations for a rise of 190,000.
The ADP National Employment Report is jointly developed with Moody’s Analytics.
The gains in employment were broad-based last month. Manufacturing payrolls rose by 9,000 and employment in the construction sector increased by 16,000. The service-providing industries added another 222,000 jobs last month.The ADP report was released ahead of the Labor Department’s more comprehensive employment report on Friday. According to a Reuters survey of economists, nonfarm payrolls probably rose by 190,000 jobs in December after a gain of 228,000 in November.
The tightening labor market encouraged the Fed to raise interest rates three times last year despite inflation persistently undershooting the U.S. central bank’s 2 percent target.
Minutes of the Fed’s Dec. 12-13 policy meeting published on Wednesday showed officials upbeat about the economy and labor market prospects. They viewed economic activity as “rising at a solid rate,” and the labor market as continuing to strengthen.[nW1N1LO001]
The Fed has forecast three rate hikes for 2018. Some economists, however, expect the central bank to lift borrowing costs four times this year, citing the impact of the $1.5 trillion in tax cuts passed by the Republican-led Congress and signed into law by President Donald Trump last month.

In a separate report on Thursday, global outplacement consultancy Challenger, Gray & Christmas said U.S.-based employers announced 32,423 job cuts in December, a 7.4 percent decrease from November. That brought the total number of layoffs in 2017 to 418,770, the fewest since 1990. Employers announced 526,915 job cuts in 2016.
The dollar rose against the yen and trimmed losses versus the euro after the ADP report. Major stock indexes on Wall Street hit fresh record highs in early morning trading, while prices for U.S. Treasuries fell.
In a third report, the Labor Department said initial claims for state unemployment benefits increased 3,000 to a seasonally adjusted 250,000 for the week ended Dec. 30.
Last week marked the 148th straight week that claims remained below the 300,000 threshold, which is associated with a strong labor market. That is the longest such stretch since 1970, when the labor market was much smaller.
The four-week moving average of initial claims, considered a better measure of labor market trends as it irons out week-to-week volatility, increased by 3,500 to 241,750 last week.
“Seasonal adjustment is especially challenging around year-end,” said Jim O‘Sullivan, chief U.S. economist at High Frequency Economics in Valhalla, New York. “Through the volatility, the data continue to signal strength in employment growth.”
Thursday’s claims report also showed the number of people receiving benefits after an initial week of aid dropped by 37,000 to 1.91 million in the week ended Dec. 23. The four-week moving average of the so-called continuing claims rose by 750 to 1.92 million