Powell Approved by Senate to Succeed Yellen as Fed Chair 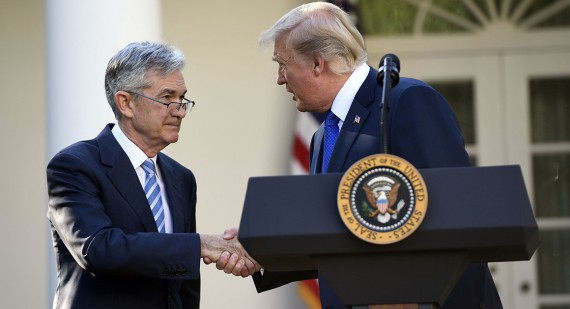 Federal Reserve Governor Jerome Powell was confirmed with broad bipartisan support in the Senate to take the helm of the U.S. central bank when Chair Janet Yellen’s term ends Feb. 3.
Lawmakers voted 84-13 in favor of the former private-equity executive, widely seen as a choice for policy continuity who President Donald Trump picked in November to replace Yellen, the first woman to lead the Fed. Dianne Feinstein, a Democrat from California, changed her vote from yes to no after the initial tally was announced.
Powell’s confirmation as Fed chair comes amid broader changes in the leadership of the U.S. central bank. The White House is looking at potential candidates to fill the vice chair slot, vacant since Stanley Fischer retired in October, and a search is underway to find a successor New York Fed President William Dudley, who plans to step down in mid-2018.
In selecting the former Carlyle Group LP managing director, Trump broke a three-decade bipartisan practice of presidents renominating the Fed chair they inherited from the president of the other party. Trump did, however, install a solid supporter of Yellen’s gradual approach to raising interest rates and someone who sympathizes with White House calls to ease bank rules imposed after the U.S. financial crisis.
Powell, 64, has never voted against the chair since joining the Fed in 2012 and sided with the dovish wing at the central bank during his Nov. 28 Senate confirmation hearing, suggesting there may still be more room for the labor market to run.
“There may be more slack, more people that can come back to work. I think we are looking at an economy that is going to go under 4 percent unemployment,” he said.
U.S. unemployment in December was 4.1 percent, the lowest level since 2000.
Yellen’s term as chair ends on Feb. 3 and she will lead the next meeting of the rate-setting Federal Open Market Committee on Jan. 30-31. The Fed has penciled in three more rate increases in 2018, according to projections released Dec. 13, while it sees tax cuts that Trump signed last month providing a short-term stimulus to the economy that will lift growth to 2.5 percent this year, compared with 2.1 percent forecast in September.
Among the no votes were four Republicans, including Marco Rubio from Florida and Texas’s Ted Cruz, as well as Massachusetts Democrat Elizabeth Warren and Bernie Sanders, an Independent from Vermont.
Powell will need to judge if this pace of policy tightening is sufficient while watching inflation, which has remained below the Fed’s 2 percent target for most of the last five years and is only forecast to creep toward that goal by the end of 2018.

Some U.S. central bankers are already concerned that the conditions are ripe for price pressures to accelerate and are also wary that low Fed rates could fan excess risk-taking by investors that could stoke an asset bubble.
Powell acknowledged that “low-for-long interest rates can have adverse effects on financial institutions and markets,” in a speech last January. “Historically, recessions often occurred when the Fed tightened to control inflation. More recently, with inflation under control, overheating has shown up in the form of financial excess,” he said.
Powell’s confirmation also cements Trump’s stamp on the Fed. With Yellen’s departure, he will have an opportunity to name at least three more people to the seven-seat Board in Washington, subject to Senate confirmation. He has already picked Randal Quarles, a former U.S. Treasury official under President George W. Bush, to be Fed vice chairman for supervision and nominated Carnegie Mellon University economist Marvin Goodfriend to be a governor.