Crunch time for NAFTA as negotiators open Montreal round of talks 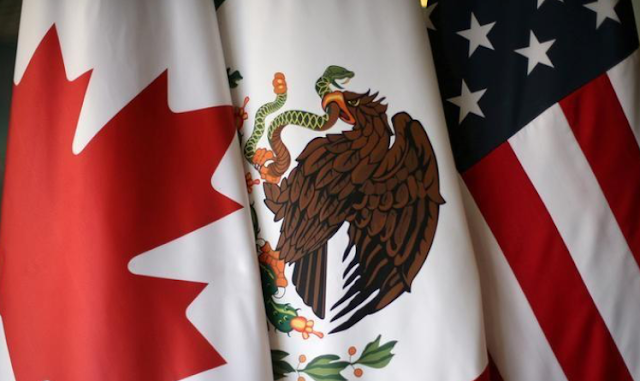 U.S., Canadian and Mexican negotiators opened a key week-long round of talks to modernize NAFTA on Tuesday amid persistent concerns the Trump administration is preparing to walk away from the trade deal, a move that could roil financial markets.


Time is running out for Canada and Mexico to address U.S. demands for major changes to the North American Free Trade Agreement, which President Donald Trump says has damaged the American economy.
Officials gathered in a Montreal hotel for the sixth and penultimate round of talks, which are supposed to conclude by the end of March to avoid a clash with Mexico’s general elections.
Insiders say the Canadian and Mexican governments are prepared to be flexible on a U.S. demand that the amount of North American content in autos be boosted to qualify for duty-free status in NAFTA.
But Ottawa and Mexico City strongly oppose the proposal that autos produced on the continent should have 50 percent U.S. content. Differences also remain over how to address the U.S. push for changes to various dispute resolution mechanisms.
“The Montreal round ... will be a high-noon moment I think for the agreement,” said James Moore, a former Canadian minister who is a member of a special council advising Canada’s Foreign Minister Chrystia Freeland on NAFTA.
Canadian officials are downbeat about the talks amid uncertainty over whether Washington really wants to negotiate or plans to walk away.
“If you’re unsure where the other side wants to go it is really difficult to know what would please them unless you capitulate, and that’s not going to happen,” one person briefed on Ottawa’s negotiating stance said on condition of anonymity.
U.S. chief negotiator John Melle and Canadian chief negotiator Steve Verheul declined to comment on Tuesday.
Trump, who has vowed to undo what he describes as disastrous trade deals, expressed differing views in recent days on what he might do about NAFTA, unsettling investors who worry that one of the world’s largest trading blocs ultimately could be disrupted.