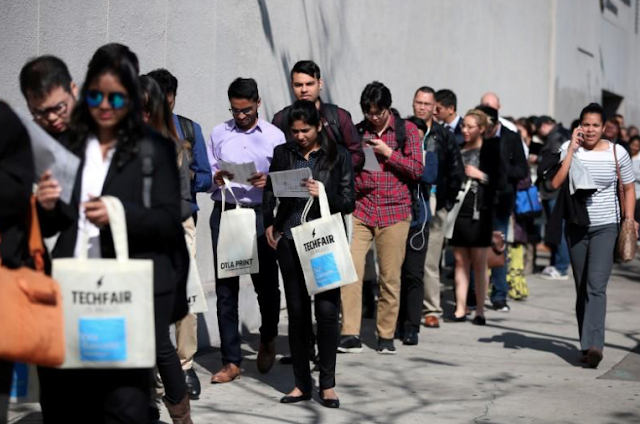 The number of Americans filing for unemployment benefits unexpectedly fell last week, suggesting a rapid tightening of the labor market that bolsters expectations the Federal Reserve will raise interest rates next week.


While another report on Thursday showed layoffs announced by U.S.-based employers rising to a seven-month high in November, the overall trend in job cuts remained low.
“Layoffs on the part of corporations are few and far between as good help is hard to find this far along in one of the longest economic expansions in the record books,” said Chris Rupkey, chief economist at MUFG in New York.
Initial claims for state unemployment benefits slipped 2,000 to a seasonally adjusted 236,000 for the week ended Dec. 2, the Labor Department said on Thursday. It was the third straight weekly decline in claims.
Economists polled by Reuters had forecast claims rising to 240,000 in the latest week. Last week marked the 144th straight week that claims remained below the 300,000 thresholds, which is associated with a strong labor market. That is the longest such stretch since 1970 when the labor market was smaller.
The labor market is near full employment, with the jobless rate at a 17-year low of 4.1 percent. Labor market tightness is seen encouraging the Fed to hike interest rates at the Dec. 12-13 policy meeting. The U.S. central bank has increased borrowing costs twice this year.
U.S. financial markets were little moved by the data as investors awaited November’s employment report due to be published on Friday.
According to a Reuters survey of economists, nonfarm payrolls probably increased by 200,000 in November after surging 261,000 in October. Job growth in October was boosted by the return to work of thousands of employees, mostly in low-wage industries like hospitality and retail, who had been temporarily dislocated by Hurricanes Harvey and Irma.
The unemployment rate is forecast unchanged in November. It has declined by seven-tenths of a percentage point this year.
A Labor Department official said claims-taking procedures continued to be disrupted in the Virgin Islands months after Hurricanes Irma and Maria battered the islands. He said claims processing in Puerto Rico was still not back to normal.
The Virgin Islands and Puerto Rico are not included in the monthly payrolls report.
Last week, the four-week moving average of initial claims, considered a better measure of labor market trends as it irons out week-to-week volatility, edged down 750 to 241,500.
“It’s signaling an extreme reluctance on the part of employers to lay off workers,” said John Ryding, chief economist at RDQ Economics in New York.
The claims report also showed the number of people receiving benefits after an initial week of aid fell 52,000 to 1.91 million in the week ended Nov. 25. The four-week moving average of the so-called continuing claims rose 1,000 to 1.91 million.
In a separate report, global outplacement consultancy Challenger, Gray & Christmas said U.S.-based employers announced plans to cut payrolls by 35,038 jobs in November.
That was the most in seven months and was up 17 percent from October. The trend in layoffs, however, remains low. Employers have announced 386,347 job cuts through November, down 22 percent compared to the same period last year and the lowest since 1997.