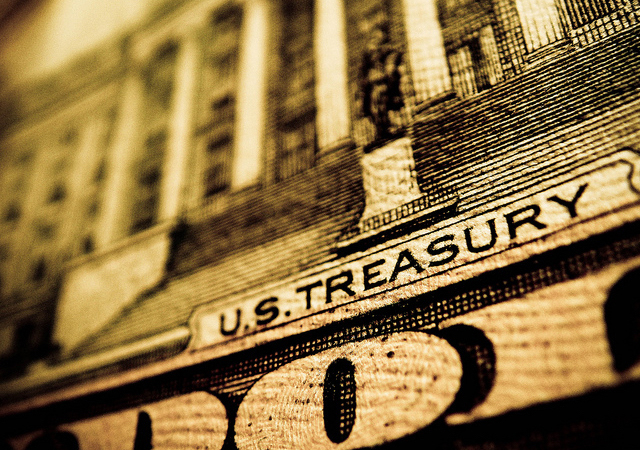 Treasury prices fell Tuesday, pushing up yields, with weakness attributed to a poorly received auction of seven-year notes and concerns over federal budget negotiations.
What are yields doing?
The yield on the 10-year Treasury note rose 1.1 basis points to 2.338%, while the yield on the two-year note rose 1.4 basis points to 1.758%. The yield on the 30-year Treasury bond rose 0.2 basis points to 2.767%.
Yields and debt prices move in opposite directions.
What drove the market?
An auction of  in seven-year Treasury notes saw weak demand.
Top congressional Democrats pulled out of a meeting with President  after he tweeted that he didn't see prospects for a deal on government spending. The government faces a  funding deadline.
Fed Gov. , Trump's pick to replace Federal Reserve Chairwoman  at the helm of the central bank when her term expires in February, made no waves in a  confirmation hearing. Powell largely reassured lawmakers he would follow a path of gradual rate rises and a slow unwind of the central bank's balance sheet laid out by Yellen.
A North Korean missile test, the first in more than two months, failed to rattle investors, providing little in the way of flight-to-safety interest in Treasurys and other assets perceived as havens.

What are analysts saying?
The seven-year note sale was "an ugly auction," said , senior money market economist at Jefferies, in a note.
"The big buyers that were around in August and September have been noticeably absent in October and November. Normally the 7-year is a good bet to rally into month-end, but dealers are stuffed with paper after this auction so it should actually see further selling pressure," he said.
While Powell seemed more comfortable in front of lawmakers than Yellen or her predecessor, , his overall message was consistent with his and some of Yellen's recent musings, said , chief U.S. economist at , in a note.
"On the eventual size of the balance sheet, for example, Powell was quick to highlight some of the vagaries at play that will dictate how much it will shrink, namely demand for reserves (an unknown)," he said. "All of this is to say, much as we have all thought, do not expect any significant divergences in approach as he kicks off his chairmanship."