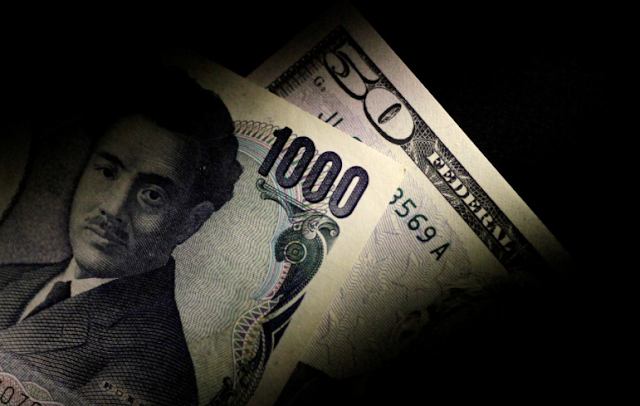 The dollar slipped to its lowest this month against the yen on Thursday, pressured by talk of possible delays to U.S. President Donald Trump’s tax reform plans as well as a risk-off mood.


The greenback had hit its highest levels in eight months against the Japanese currency at the start of the week JPY=EBS, boosted by strong risk appetite across markets, but has since fallen back by about 1.3 percent.
It fell as low as 113.25 yen on Thursday after a sudden fall in Japanese equities from multi-decade peaks dampened risk sentiment in Asian trade -- a mood that continued into London trading hours, with European stocks also falling.
The yen is a low-yielding currency often used to fund investment in higher-yielding currencies and assets when risk sentiment is positive.
The dollar was also 0.3 percent down against a basket of major currencies .DXY.
The euro climbed to a six-day high of $1.1645 EUR=, having dropped as low as $1.1553 on Tuesday, its weakest since July 20.
“The dollar is running out of steam. There’s nothing to drive it higher,” said BMO Capital Markets currency strategist Stephen Gallo in London.
The “Trumpflation trade” -- bets that Trump’s policies would boost growth and inflation, meaning a faster pace of U.S. interest rate increases -- had driven the dollar to 14-year highs after his election and 10-year U.S. Treasury yields to their highest since 2014.
But they and the dollar have since fallen back.
A U.S. Senate tax-cut bill, differing from one in the House of Representatives, was expected to be unveiled on Thursday, complicating a Republican push for a tax overhaul.
Any potential delay in the implementation of tax cuts, or the possibility of proposed reforms being watered down, would tend to work against the dollar, analysts said.
”Disappointment over the tax reforms is driving the dollar lower. There is a lack of momentum behind the recent moves and the euro’s outlook remains bright as global money managers remain underweight in the single currency,” said Marc Ostwald, a strategist at ADM Investor Services International in London.
The New Zealand dollar touched a two-week high after comments from the country’s central bank on the inflation outlook were taken as hawkish as it kept interest rates unchanged as expected.
The currency rose as high as $0.6977, its strongest since Oct. 24, before dipping to trade flat on the day at $0.6969.