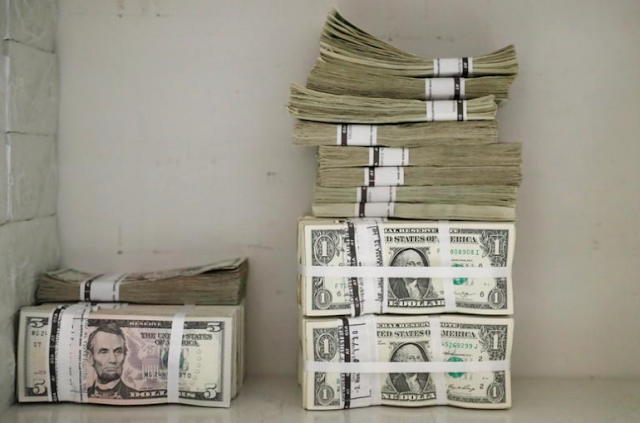 The dollar slipped to a four-week low against the yen on Friday, after a newspaper report that investigators probing possible Russian interference in the 2016 U.S. election had subpoenaed President Donald Trump’s election campaign for documents.


Special Counsel Robert Mueller’s team issued the subpoena last month for documents containing specified Russian keywords from more than a dozen officials, according to the report in the Wall Street Journal.
The report overshadowed any support for the dollar from the approval of a tax-reform bill in the U.S. House of Representatives on Thursday, which had been a key focus for markets. The greenback slipped more than half a percent to as low as 112.395 yen, its weakest since Oct. 19.
The bill - which would bring about the biggest U.S. tax-code overhaul since the 1980s - will now move to the Senate, where a tax-writing panel finished debating and approved a bill late Thursday evening.
“Global markets haven’t batted an eyelid to the House Republicans passing their version of the Tax Cuts and Jobs Act through, not least because the spotlight has been stolen by (the Mueller) reports,” said ING currency strategist Viraj Patel, in London.
“It’s difficult to see anything but the dollar losing out in an environment where policy and political uncertainty remain elevated,” he said, adding that the true test for the tax bill would come in the Senate, where the Republicans have only a very thin lead.
Against a basket of six major currencies, the dollar was down 0.3 percent at 93.700.
The index had edged up overnight to pull away from a four-week trough of 93.402 set on Wednesday, with Wall Street shares higher after sagging through much of the week, causing 4 basis points jump in the long-term Treasury yield to shore up the dollar.
“While the comeback in equities has stopped the recent decline in Treasury yields, the focus remains on U.S. tax reforms,” said Junichi Ishikawa, senior forex strategist at IG Securities in Tokyo.
“Yields cannot rise much further when it is unclear whether tax reforms can go through this year. Dollar/yen can test the 114.00 handle but lacks momentum for a sustained surge under such conditions.”
The euro rose 0.2 percent to $1.1794.


Bitcoin hit another all-time high just shy of $8,000, with analysts saying a software upgrade that had been suspended but might now take place later on Friday was behind the move higher.