$10,000 in sight for bitcoin as it rockets to new record high 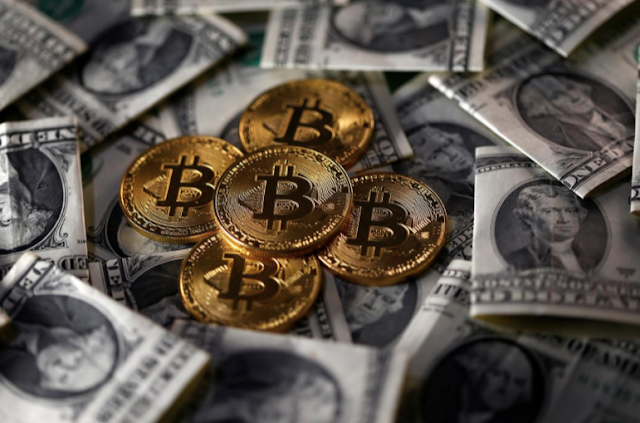 Bitcoin’s vertiginous ascent showed no signs of abating on Monday, with the cryptocurrency soaring to another record high just a few percent away from $10,000 (£7,493.59) after gaining more than a fifth in value over the past three days alone.

The digital currency has seen an eye-watering tenfold increase in its value since the start of the year and has more than doubled in value since the beginning of October, lifted by the prospect of crossing over into the financial mainstream, amid a flurry of crypto-hedge fund launches.
It surged as much as 4.5 percent on Monday to trade at $9,721 on the Luxembourg-based Bitstamp exchange, before easing back to around $9,600 by 1155 GMT.
Data compiled by Alistair Milne, the Monaco-based manager of the Altana Digital Currency Fund, showed U.S. bitcoin wallet provider Coinbase added 300,000 users between Wednesday and Sunday, during the U.S. Thanksgiving holiday. The total number of Coinbase users globally now stands at 13.3 million.
“The Coinbase data is evidence that adoption is not slowing down,” Milne told Reuters. “Breaking $10,000 seems inevitable following the recent price action.”
Bitcoin’s price has been helped in recent months by the announcement that the world’s biggest derivatives exchange operator CME Group would start offering bitcoin futures. The company said last week the futures would launch by the end of the year though no precise date had been set.
So far, institutional investors have largely stayed away from the market, viewing it as too volatile, too risky and too complex to invest other people’s money into. But some say the launch of the CME futures could lure in more mainstream investors.
“Promises of bitcoin futures opening the door to institutional money are supercharging the price,” said Charles Hayter, founder of cryptocurrency data analysis website Cryptocompare.