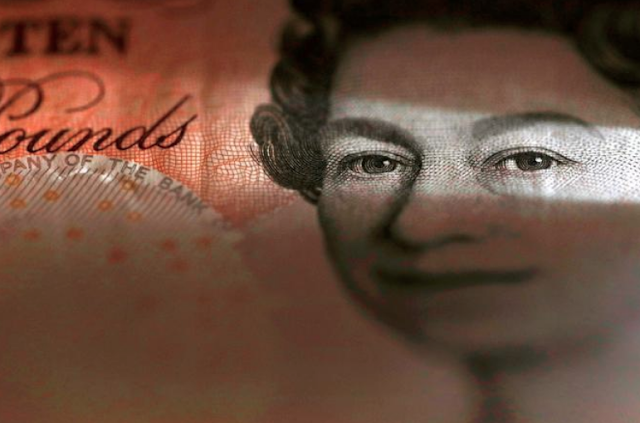 The pound edged up on Monday, as investors bet that economic data this week would put the Bank of England on track for a rate rise by the end of the year and - at least for the time being - overshadow Brexit.

Sterling recorded its best week in four against the dollar in volatile trade last week, with the currency subject to big price swings on apparently conflicting reports on the negotiations on Britain’s departure from the EU.
On Friday, the pound dropped almost half a cent against the dollar in less than a minute after a German government spokesperson said time was running out for a deal, before recovering after British Prime Minister Theresa May said she could have more to say on a financial settlement between London and Brussels at this week’s EU summit.
Trading appeared calmer on Monday, with the pound up 0.1 percent at $1.3296 by 0830 GMT, staying in a trading range of $1.3270 to $1.3310. It hit a 12-day high of 88.57 pence against a broadly weaker euro.
Societe Generale macro strategist Kit Juckes said this was “not a good week to short the pound”, given several data releases that could paint an upbeat picture of the UK economy, and because BoE Governor Mark Carney was likely to strike a hawkish tone when appearing in front of the Treasury Select Committee on Tuesday.
“I think we will react more to ‘good’ UK data than ‘bad’,” he said.
Data on Friday showed speculators slightly trimmed their long positions on the pound - bets that it would rise - in the week up to last Tuesday. But they were still net-long on the currency for a third week running, having been short for almost two years.


That turnaround in positioning has been driven largely by a repricing of Bank of England interest rate expectations, after the BoE last month hinted rates could rise as soon as November.
Inflation data due on Tuesday is expected to show consumer price growth hitting a five-year high of 2.8 percent year-on-year, which would firm up expectations of a near-term hike. Labour market data due on Wednesday will also be closely watched, as will retail sales numbers on Thursday.

May travels to Brussels on Monday for talks with European Commission chief Jean-Claude Juncker, after a deadlock in Brexit talks appeared to dash British hopes that a summit later in the week could launch negotiations on future trade ties.
MUFG currency economist Lee Hardman said market expectations of progress at the summit were low.
“The balance of risks for the pound could be more titled to the upside ahead of the summit,” he said. “Downside risks for the pound would increase if ‘sufficient progress’ (on negotiations) has still not been made by the end of this year.”