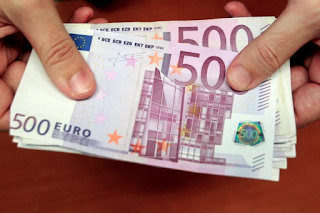 The euro vaulted to a one-week high on Tuesday after Germany’s trade data blew past expectations, boosting hopes the eurozone economy’s outlook remained robust.
The currency’s rise this year has lost some momentum in recent days as political concerns -- notably Spain’s Catalan crisis -- have grown. The euro has been pushed down more than 3 percent against the dollar over the last month but underlying economic data has remained robust.

Tuesday offered more evidence of that with German trade activity picking up in August as exports outpaced imports adding to evidence that Europe’s biggest economy performed strongly in the third quarter, ignoring a stronger euro.
“The focus is shifting away from the political news to the economic data and that is turning to be euro positive and we should see the currency supported before the ECB meeting,” said Viraj Patel, an FX strategist at ING Bank in London.
On Tuesday, the euro rose half a percent to $1.1800 (0.8943 pounds), its highest since Oct. 2, after overnight comments from Sabine Lautenschlaeger, a member of the European Central Bank executive board, calling for the ECB to roll back asset purchases in 2018.

“Her hawkish comments also appear supportive for the euro but the political overhang has taken the air out of the euro balloon, and this ongoing political uncertainty will most certainly cap any near-term rallies,” said Stephen Innes, head of Asia-Pacific trading at OANDA.
Market participants expect the European Central Bank to announce a roadmap to unwind its multi-year record stimulus plans at its next policy meeting this month.
The ECB is due to decide on Oct. 26 whether to continue bond purchases next year. Signals coming from policymakers suggest that they will opt for lower volumes but also an extension of the scheme, possibly by six or nine months.
But some market watchers such as Stephen Gallo, European head of FX strategy at BMO Financial Group think political developments may stay the ECB’s hand and force it to delay a rollback announcement beyond October’s review.
The dollar ran into some profit taking on Tuesday with the currency dropping a fifth of a percent against a trade-weighted basket of its rivals.
The index was last at 93.47, down 0.2 percent on the day but still in reach of a 10-week high of 94.267 scaled on Friday when surprisingly stronger U.S. September wages data enhanced already high expectations that the Fed would hike rates for a third time in 2017.
Also pushing the dollar lower was a stronger-than-expected daily midpoint fixing by Beijing for the Chinese currency which prompted some traders to unwind long dollar trades.