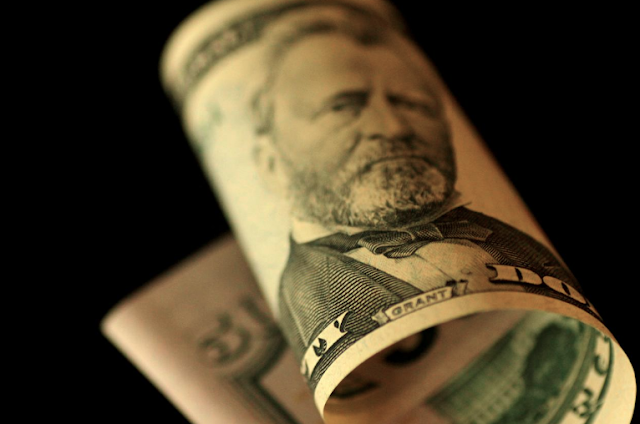 The dollar soared on Monday as U.S. Treasury yields hit their highest level since mid-July, while Spanish borrowing costs rose and stocks fell as a violent police crackdown on an independence vote in Catalonia rattled investors.
Other European bourses rose and Wall Street looked set to open up 0.2 percent, according to index futures.
Firming expectations the U.S. Federal Reserve will raise interest rates for a third time this year and talk of a potentially more hawkish successor to Fed Chair Janet Yellen combined to push Treasury yields higher.
Ten-year yields topped 2.37 percent, up 4 basis points on the day, pushing the dollar half a percent higher against a basket of currencies.

“The dollar is stronger on higher Treasuries, and the market is seeming to play the idea that the Fed might become more hawkish when we look at the possible candidates for the board of directors,” said Antje Praefcke, FX strategist at Commerzbank.
Treasury yields later pulled back - the 10-year yield last stood at 2.34 percent, up just 1.3 basis points on the day, but the dollar index retained most of its gains.
The euro fell 0.7 percent to $1.1733, though traders said the Catalan referendum had only a limited impact on the single currency.
But in Spain, the IBEX stocks index fell 1.4 percent, underperforming the pan-European STOXX 600 index, which rose 0.3 percent.
The two biggest fallers on the IBEX index were Catalonia-based Banco de Sabadell and Caixabank, down 5.3 and 4.1 percent respectively.
Spanish 10-year government bond yields rose more than 7 basis points to 1.69 percent, taking the gap between them and German benchmarks to its widest in nearly four months.
The cost of insuring Spanish debt, as measured by five-year credit default swaps, rose to its highest in a month.
Catalan officials said 90 percent of voters in Sunday’s ballot favored secession, raising the possibility of a unilateral declaration of independence in the wealthy region.

“This issue is likely to complicate policy-making at a national level as opposition parties seek to gain political capital from what is arguably a gross PR error on the part of PM Rajoy’s government,” said Richard McGuire, head of rates strategy at Rabobank in London.
However, mainstream parties largely back premier Mariano Rajoy’s opposition to Catalan independence, even though he faces criticism over his handling of the issue.
Asian shares rose after upbeat economic data from China and Japan. MSCI’s broadest index of Asia-Pacific shares outside Japan added 0.2 percent.
Japan’s Nikkei closed up 0.2 percent after a survey showed the mood among big manufacturers was its best in a decade.
China’s manufacturing activity grew at its fastest pace since 2012 last month. The official Purchasing Managers’ Index released on Saturday rose to 52.4 from 51.7 in August.
Chinese markets were closed for a week-long holiday.
The Japanese yen fell half a percent to 113.02 per dollar while sterling fell 0.6 percent to $1.3325.
The dollar has been on a roll since Fed chief Yellen said last week it would be “imprudent” to keep monetary policy on hold until U.S. inflation picked up to 2 percent.

Speculation President Donald Trump might choose former Fed Governor Kevin Warsh, who is considered more hawkish than Yellen, to replace her as head of the central bank also boosted the dollar.
The dollar notched up its best weekly performance of 2017 last week, lifted also by a revival of the “Trumpflation” trade on expectations Trump would deliver a stalled tax reform plan.
Oil prices fell after a Reuters survey found output from the Organization of the Petroleum Exporting Countries (OPEC) rose by 50,000 barrels a day last month.
Brent crude, the international benchmark, fell 91 cents a barrel to $55.88.
The strong dollar helped drag gold down to its lowest in almost seven weeks. The precious metal fell to as low as $1,270 an ounce before edging back up to $1,274, down 0.4 percent on the day.