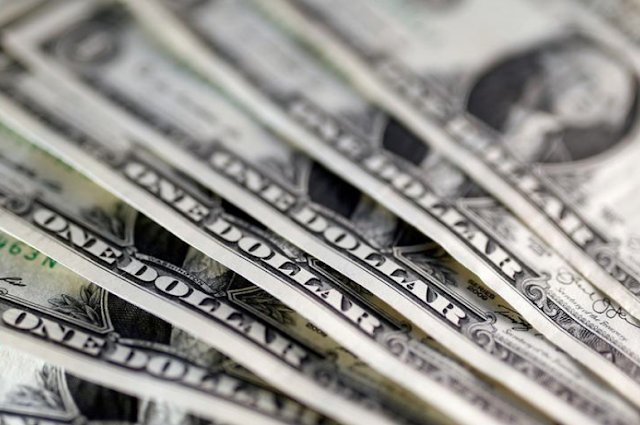 The dollar touched a fresh seven-week high versus a basket of currencies on Friday, supported by hopes for progress on U.S. tax reforms, with traders looking to U.S. jobs data for near-term catalysts.
Congressional Republicans moved to hasten an overhaul of the U.S. tax code on Thursday, with the Republican-controlled House of Representatives approving a fiscal 2018 spending blueprint to help advance an eventual tax bill.
The dollar drew additional support after data released on Thursday showed that orders for core capital goods in August were stronger than previously reported, suggesting robust business spending could help offset some of the economic drag of Hurricanes Harvey and Irma.
The dollar index, which measures the dollar’s value against a basket of six major currencies, last traded at 93.955. It rose to 94.016 at one point on Friday, its strongest level since Aug. 17.
“We have the very first step where Congress passed the budget details, so you’re one step nearer to tax reform,” said Heng Koon How, head of markets strategy for United Overseas Bank (UOB) in Singapore.
The near-term focus is on U.S. job data for September, due later on Friday. The employment data is expected to show a slowdown in jobs growth, reflecting the effects from Hurricane Harvey and Irma.

“After both hurricanes, expectations are now very low... So I think any number above 100,000 will be a positive surprise,” said Heng at UOB, referring to the nonfarm payrolls data.
According to a Reuters survey of economists, the jobs data will likely show that nonfarm payrolls increased by 90,000 jobs last month after rising by 156,000 in August.
Against the yen, the dollar inched up 0.1 percent to 112.89 yen, trading below last week’s high of 113.26 yen, which was the dollar’s strongest level since mid-July.
The euro held steady at $1.1708, languishing near a low of $1.16955 set on Tuesday, its weakest level since August.
Sterling remained under pressure and slipped to fresh four-week lows on Friday, dented by worries over a possible leadership battle at the top of the British government.


Divisions over the future of British Prime Minister Theresa May burst into the open on Friday, with allies saying she should carry on and a former Conservative Party chairman claiming the support of 30 lawmakers for a plot to topple her.
That came after May reinforced markets’ doubts about her ability to govern effectively in a poorly-received keynote speech at the annual Conservative party conference on Wednesday.
The conference had been meant to help reassert May’s grip on the party as she tries to revive Brexit talks. But after a speech that was interrupted by coughing fits and a prankster, investors saw the prime minister’s position weakened further, and more vulnerable to leadership challenges.
Sterling fell 0.2 percent to $1.3099. It slipped to $1.3088 at one point on Friday, its lowest level since Sept. 7. Sterling has shed 2.2 percent this week, putting it on track for its worst weekly performance since October 2016.