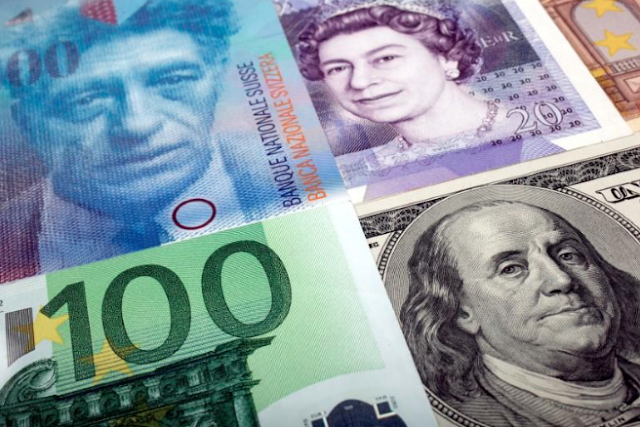 The dollar dipped to a 12-day low against a basket of major currencies on Wednesday as uncertainty that U.S. President Donald Trump’s would push through his planned tax reforms pushed the greenback down against a broadly stronger euro.
The euro hit a two-week high of $1.1845 EUR=, climbing alongside Spanish stocks and bonds, on relief that Catalonia had stopped short of formally declaring independence from the rest of Spain.
The single currency was also supported by expectations that the European Central Bank would announce that it is winding back its huge bond-buying program when it holds its next policy meeting later in the month, said Commerzbank currency strategist Thu Lan Nguyen, in Frankfurt.
“The euro has been supported mainly due to the tapering decision coming up for the ECB and general uncertainty around the U.S. tax plans,” she said.

U.S. President Donald Trump’s public feud with Tennessee Senator Bob Corker, an influential fellow Republican, raised concern among investors that his push for a tax-code overhaul could be harmed.
The dollar index -- which measures the greenback against six major rivals, the euro most prominent among them -- slipped 0.1 percent to 93.175 .DXY.
“The situation is still potentially incidiary,” said Rabobank currency strategist Jane Foley in London, refering to the crisis over Catalonia.
Any moves higher in the euro were likely to be limited, given the extent to which it has already appreciated against the dollar - over 12 percent so far this year, he added.
Stronger-than-expected U.S. wages numbers had helped the greenback rise to a three-month high of 113.440 yen JPY= on Friday, but the latest flare-up in tensions with North Korea have seen the dollar lose more than 1 percent against the Japanese currency still then.
Investors were awaiting the release of minutes of the September Federal Reserve policy meeting later in the session. The Fed had signaled at the meeting that it may raise interest rates for a third time this year even with inflation staying below its 2 percent goal.
But with the Fed funds futures almost fully pricing in the likelihood of a rate hike in December and the recent spike in Treasury yields losing momentum, analysts said fresh factors could be needed for the dollar to renew its advance.