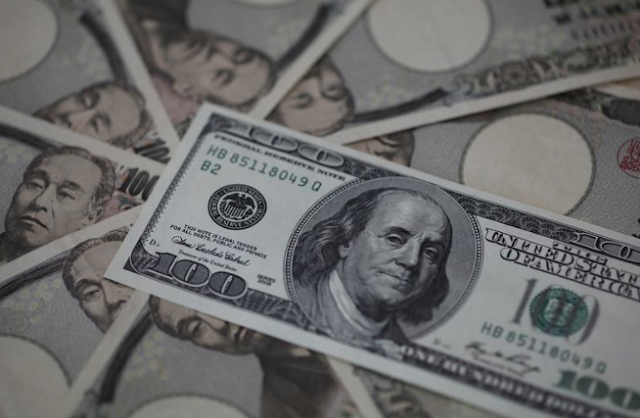 The dollar touched a three-month high against the yen on Monday, with an emphatic election victory for Japan’s ruling party keeping yen-weakening stimulus measures at the heart of government policy.


Prime Minister Shinzo Abe’s ruling party scored a big win in Sunday’s election with his coalition keeping its two-thirds “super majority” in the lower house, local media said.
Abe’s victory eased fears that the economic steps implemented under his leadership - such as the Bank of Japan’s super easy monetary policy - would be disrupted and halt the yen’s depreciation against the dollar.
“An LDP win did not come as a surprise, but it still helped clear uncertainty that had been preventing participants from buying the dollar,” said Yukio Ishizuki, senior currency strategist at Daiwa Securities.
“Overcoming deflation with the BOJ easing is at the crux of the Abe administration’s policies and this will now be allowed to continue indefinitely. It’s relief over the BOJ policies, rather than hopes for fresh fiscal stimulus, that is weakening the yen.”


The U.S. currency was up 0.25 percent at 113.79, losing a bit of momentum after earlier touching 114.10, its highest since July 11.
Masashi Murata, senior currency strategist at Brown Brothers Harriman in Tokyo, said dollar/yen-supportive election elation was likely to peter out relatively quickly, with market focus returning to U.S. factors like tax reform efforts.
“The election outcome means the Abe administration will retain the status quo, making no changes, and continue with its policies,” Murata said. “It will find little need for fresh steps when the GDP has registered six quarters of growth, unemployment is under 3 percent and the Nikkei is above 21,000.”
The greenback had already gained about 0.9 percent on Friday after the U.S. Senate approved a budget blueprint for the 2018 fiscal year, clearing a critical hurdle for Republicans to pursue a tax-cut package without Democratic support.
The dollar was supported as U.S. yields rose, with the two-year yield hitting a nine-year high, as the progress in tax reforms boosted expectations of increased U.S. Government borrowing and a possible pickup in inflation. [US/]
Another focal point for the dollar was who U.S. President Donald Trump would appoint as the next Federal Reserve chief. Investors are hoping whoever is nominated pursues the same monetary policy that has supported rising stock prices for the past nine years.
The euro was 0.15 percent lower at $1.1769, extending losses from Friday when it lost 0.6 percent.
The common currency has drifted lower from a 2-1/2-year peak of $1.2092 scaled on Sept. 8, as hopes for the European Central Bank to take a more hawkish stance have been tempered by speculation that it is not be in a hurry to taper its easy policy.
The ECB holds a policy meeting on Thursday, at which policymakers are seen cutting bond purchases but voting for an extension in stimulus.
The political situation in Europe has also been a drag for the euro, with the Spanish government having taken desperate steps over the weekend to thwart Catalonia’s bid for independence.
According to calculations by Reuters and Commodity Futures Trading Commission data released on Friday, speculators trimmed their net long euro positions in the week to Oct. 17 to $13.303 billion from the previous week’s $14.474 billion, which was the highest since 2011.
The dollar index against a basket of six major currencies rose to 93.872, its highest since Oct. 6, before pulling back to 93.767, up 0.05 percent on the day.
The New Zealand dollar, battered last week by a change in government, slipped to a five-month low of $0.6932 against the broadly stronger U.S. currency and last traded at $0.6964. The kiwi shed about 3 percent last week.