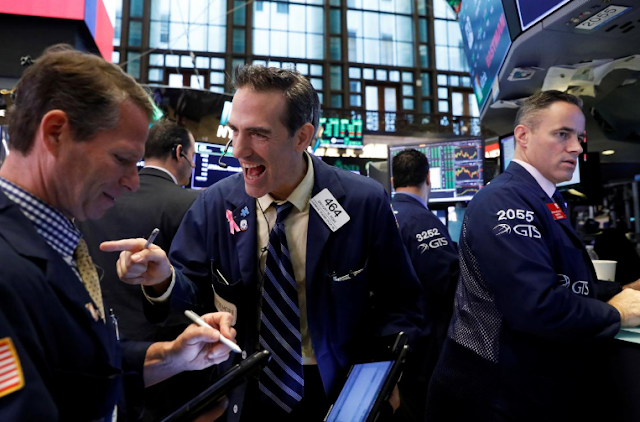 Wall Street gained on Friday as a tepid U.S. jobs report did little to change bets for another interest rate hike this year, while investors were on track to kick off a typically dour month for stocks on a positive note.
U.S. job growth slowed more than expected in August after two straight months of hefty increases. The Labor Department said on Friday nonfarm payrolls increased by 156,000 last month, while economists had forecast an increase of 180,000.
Following the data, traders were betting on a 38 percent chance that the Federal Reserve would raise rates at its December meeting, similar to bets earlier in the week, according to the CME Group’s FedWatch tool.
The employment report was “a little disappointing but not wildly different then what we’ve historically seen,” said Paul Nolte, portfolio manager at Kingsview Asset Management in Chicago, who noted that August’s report tends to have seasonal quirks. “There’s really nothing in the report that I think dissuades the market from a bullish bias.”
The Dow Jones Industrial Average .DJI rose 62.46 points, or 0.28 percent, to 22,010.56, the S&P 500 .SPX gained 6.71 points, or 0.27 percent, to 2,478.36 and the Nasdaq Composite .IXIC added 5.02 points, or 0.08 percent, to 6,433.68.
Market watchers were also digesting other economic data. U.S. construction spending unexpectedly fell in July, hitting a nine-month low, but the Institute for Supply Management said its index for factory activity soared to 58.8 in August, the highest reading since April 2011.
“The markets are up, I think, because the economic data that has been released is still supportive of economic growth, still supportive of earnings growth, which ultimately is going to drive stock prices,” Nolte said.
Energy .SPNY and financials .SPSY led among major stock sectors while utilities .SPLRCU lagged.
The S&P 500 hovered near all-time highs as major stock indexes were on track to rise for a second straight week.
The benchmark S&P posted a 0.06 percent gain in August, its most sluggish monthly performance since March’s slight decline. September ranks as the worst month for stocks, according to the Stock Trader’s Almanac.
Shares of major automakers climbed after the companies reported better-than-expected August sales and issued optimistic outlooks as Houston area residents replace cars and trucks after Hurricane Harvey. General Motors (GM.N) rose 3 percent and Ford Motor (F.N) gained 3.4 percent.
Lululemon Athletica (LULU.O) shares rose 6.1 percent after the yoga and leisure apparel maker reported profit and revenue that topped expectations.

Advancing issues outnumbered declining ones on the NYSE by a 2.11-to-1 ratio; on Nasdaq, a 1.58-to-1 ratio favored advancers.