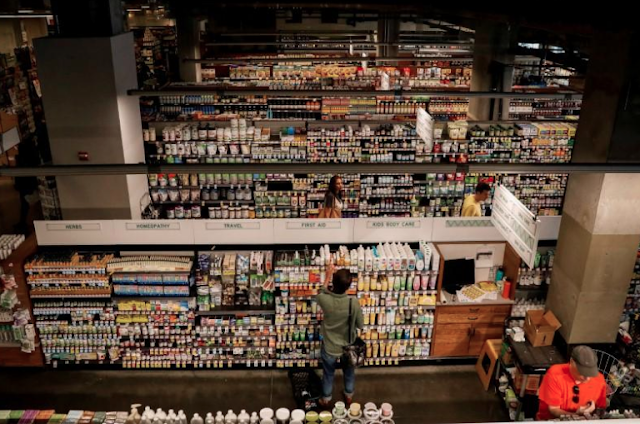 The U.S. economy grew a bit faster than previously estimated in the second quarter, recording its quickest pace in more than two years, but the momentum probably slowed in the third quarter as Hurricanes Harvey and Irma temporarily curbed activity.
Gross domestic product increased at a 3.1 percent annual rate in the April-June period, the Commerce Department said in its third estimate on Thursday. The upward revision from the 3.0 percent rate of growth reported last month reflected a slightly faster pace of inventory investment.
Growth last quarter was the quickest since the first quarter of 2015 and followed a 1.2 percent pace in the January-March period. Economists had expected that the second-quarter GDP growth rate would be unrevised at 3.0 percent.
Harvey, which struck Texas, has been blamed for much of the decline in retail sales, industrial production, homebuilding and home sales in August. Further weakness is anticipated in September after Irma slammed into Florida early this month.
Rebuilding is, however, expected to boost GDP growth in the fourth quarter and in early 2018. Estimates for the growth rate in the July-September period are just above 2.2 percent.
However, they could be raised after another report from the Commerce Department on Thursday showed a decline in the goods trade deficit in August as well as large increases in both retail and wholesale inventories.

Harvey and Irma continue to impact the labor market and are expected to cut into job growth this month. In a third report, the Labor Department said initial claims for state unemployment benefits increased 12,000 to a seasonally adjusted 272,000 for the week ended Sept. 23.
Still, the labor market remains strong. Claims have now been below the 300,000 threshold, which is associated with a robust labor market, for 134 straight weeks. That is the longest such stretch since 1970, when the labor market was smaller.
Prices for U.S. Treasuries held losses after the data and the dollar .DXY fell to a session low against a basket of currencies. U.S. stock index futures were trading lower.

With GDP accelerating in the second quarter, the economy grew 2.1 percent in the first half of 2017. Still, economists believe growth this year will not breach President Donald Trump’s ambitious 3.0 percent target.
Trump on Wednesday proposed the biggest U.S. tax overhaul in three decades, including lowering the corporate income tax rate to 20 percent and implementing a new 25 percent tax rate for pass-through businesses such as partnerships to boost the economy.
But the plan gave few details on how the tax cuts would be paid for without increasing the budget deficit and national debt, setting up what is expected to be a bruising battle in the U.S. Congress.
Growth in consumer spending, which makes up more than two-thirds of the U.S. economy, was unrevised at a 3.3 percent rate in the second quarter as an increase in spending on services was offset by a downward revision to durable goods outlays. Consumer spending in the second quarter was the fastest in a year.
Amid robust consumer spending, businesses accumulated a bit more inventory than previously reported to meet the strong demand. Inventory investment added just over one-tenth of a percentage point to GDP growth in the second quarter. It was previously reported to have been neutral.
Growth in business spending on equipment was unchanged at a rate of 8.8 percent, the fastest pace in nearly two years.
Investment on nonresidential structures was revised to show it increasing at a 7.0 percent pace, up from the previously reported 6.2 percent rate.
Both export and import growth were revised slightly lower. Trade contributed two-tenths of a percentage point to GDP growth last quarter. Housing was a slightly bigger drag on growth in the last quarter than previously reported, subtracting 0.3 percentage point from output.
The government also sharply revised down growth in corporate profits for the second quarter. Profits after tax with inventory valuation and capital consumption adjustments increased at a 0.1 percent rate instead of the previously reported 0.8 percent pace.