Sterling jumps on expectations for Brexit offer from UK PM 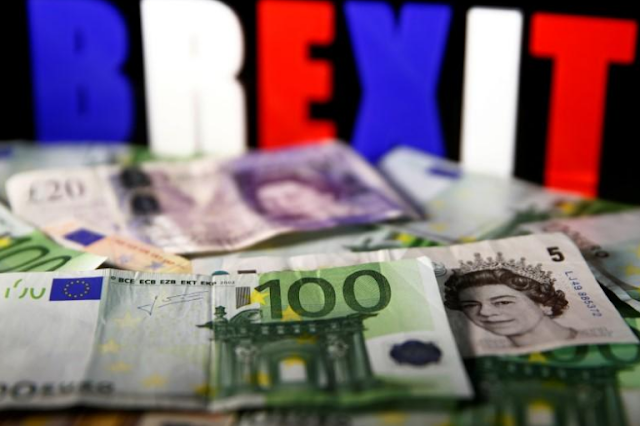 Sterling firmed against the dollar on Thursday, with traders hopeful that a much-anticipated speech from Prime Minister Theresa May the following day would signal she wants a “soft” exit for Britain from the European Union.
The BBC reported on Thursday that May will say on Friday that Britain is willing to pay 20 billion euros (£17.65 billion) to the EU during a post-Brexit transition period, but only if it has access to the bloc’s single market.
That eased fears that she would pursue a “harder” Brexit - a complete dismantling of political and economic ties with the EU - that some in her cabinet - notably foreign minister Boris Johnson - want.
Having earlier dipped to as low as $1.3471 GBP=D3, the pound climbed in afternoon trade in London, reaching as high as $1.3568 to trade 0.6 percent higher on the day. That left sterling less than a cent away from its highest levels since the results of the June 2016 Brexit referendum.
Against the euro, sterling was up 0.1 percent at 88.02 pence per euro EURGBP=.
“In what is being described as a ‘generous offering’, it is thought that it might include a guarantee that no EU country would lose out from changes to the EU’s current budget as a result of the UK leaving,” said Paresh Davdra, CEO of RationalFX.

“Such an assurance could well likely instil the much-needed confidence in the city for an appeasement with the EU going forward. This will be expected to reinforce the pound against its peers, although it could be a very short burst.”
Sterling on Wednesday reached as high as $1.3659, but it pulled away from those levels after the U.S. Federal Reserve signalled it would hike interest rates again this year, lifting the dollar across the board.
The Fed left rates unchanged but signalled it still expects one more increase by the end of the year despite a recent bout of low inflation, driving up the dollar to its highest in more than two weeks against a basket of currencies .DXY.
The pound had until the Fed statement been building on the gains of last week, when it jumped around 3.3 percent against the dollar after the Bank of England said it was likely to raise interest rates in the “coming months”. It is now heading for its first week of losses in five.
“Higher UK rates are supportive for a stronger pound although the risk posed by Theresa May’s keynote speech in Florence on Friday makes us somewhat cautious in the near-term, especially after the pound’s recent sharp gains,” MUFG currency economist Lee Hardman said in London.
A Reuters poll on Wednesday found almost two-thirds of economists now expect a BoE rate hike to come in November, though three quarters of those queried believed that tightening policy then would be a mistake.