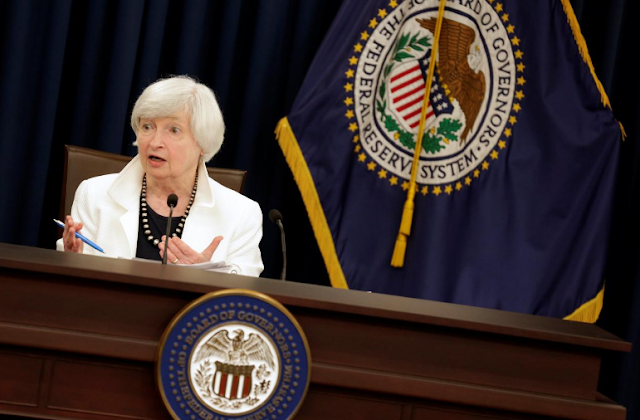 The Federal Reserve needs to continue gradual rate hikes despite broad uncertainty about the path of inflation, Fed Chair Janet Yellen said on Tuesday in remarks that acknowledged the central bank’s struggles to forecast one of its key policy objectives.
It is possible, Yellen said, that the Fed may have “misspecified” its models for inflation, and “misjudged” key facts like the underlying strength of the labor market and whether inflation expectations are as stable as they seem, and central bankers need to remain open to that possibility as they decide on policy.
Still, recent low inflation was likely a reflection of factors that would fade over time and despite uncertainties, it “would be imprudent to keep monetary policy on hold until inflation is back to 2 percent,” Yellen said in a 37-page address to the National Association for Business Economics
“Without further modest increases in the federal funds rate over time, there is a risk that the labor market could eventually become overheated, potentially creating an inflationary problem down the road that might be difficult to overcome without triggering a recession,” she said.
Yellen’s remarks attempt to resolve a debate that has split members of the central bank among those worried that inflation may be permanently anchored below the Fed’s 2 percent target because of structural changes in the global economy, and those who feel it is only a matter of time before tight labor markets lead wages and prices to rise.
She did not provide a definite answer, noting that in current forecasts there was a 30 percent chance inflation could range anywhere from 1 percent to 3 percent, vastly different outcomes either of which could rewrite the Fed’s policy approach. But she did make clear the Fed still feels a gradual pace of rate hikes remains the base case.
Kevin Logan, chief U.S. economist at HSBC Securities, in New York, said her message is that “they’re not really sure” whether the weak inflation is transitory but that “nonetheless policy is accommodative.”
“The gradual approach means that, even if they are wrong on inflation it won’t be a big mistake. That’s the message they are trying to convey.”
The dollar shot up then retreated after Yellen’s comments, reflecting uncertainty about her message. Treasury yields and stocks edged slightly higher.

The Fed, which has raised rates twice this year, last week held rates steady and released forecasts that suggest most policymakers expect to raise rates once more by year-end and three times further next year. Traders of short-term interest-rate futures see about a 76 percent chance of December rate hike, but are betting on only one rate hike next year.
Yellen said Tuesday she would be looking at inflation and labor market data closely in coming months to assess the outlook, but “the data is noisy and it’s not going to be a magic bullet.”
And while the timing of rate hikes may not be predictable, she said, “the path is likely to be gradual.”
Yellen walked systematically through arguments that weak inflation reflected structural changes, and largely discounted them.
There was not yet “empirical support” for the theory that global trade, worldwide supply chains, and other forces were holding down U.S. prices, she said.
Meanwhile, the Fed calculates that cyclical slack in the labor market was now having a “negligible” impact on low inflation readings, compared to oil prices and other changes that will fade. And some aspects of the labor market that appear weak, such as the still-elevated number of part-time workers, may reflect permanent changes in the workforce, and not cyclical factors, Yellen said.
There were many uncertainties, however, and downward pressure on inflation could prove unexpectedly persistent.
“My colleagues and I may have misjudged the strength of the labor market, the degree to which longer-run inflation expectations are consistent with our inflation objective, or even the fundamental forces driving inflation,” possibilities which the Fed needs to examine over time and change the course of policy if needed.
But for now the Fed “continues to anticipate that, with gradual adjustments in the stance of monetary policy, inflation will rise and stabilize at around 2 percent over the medium term,” she said. “We should be wary of moving too gradually.”