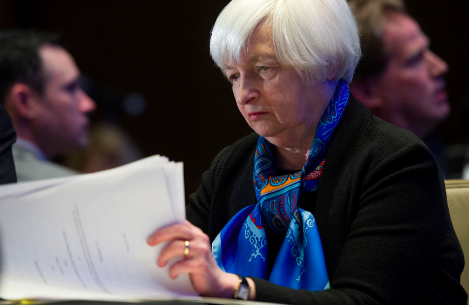 The Federal Reserve helped pull the U.S. economy from the brink of disaster by purchasing vast quantities of government bonds and mortgage-backed securities. That rescue, known as quantitative easing, was designed to promote economic growth by keeping long-term interest rates low, but it also pumped up the assets on the Fed’s balance sheet to an unheard-of $4.5 trillion. The Fed stopped its buying spree in 2014, but purposely refrained from paring its bloated balance sheet until it was sure the economy was good and ready. Now, that moment is approaching, with most policy makers expecting the process to begin later this year.

At $4.5 trillion, the Fed’s balance sheet is equivalent to about a quarter of America’s annual gross domestic product. By holding down yields on Treasury securities and mortgage-backed debt, the Fed made it cheaper for the U.S. government to finance its budget deficits and for home buyers to take out a loan. It reduced costs for companies in China and other emerging markets that borrow in dollars. It also had important implications for financial markets. The Fed’s purchases made U.S. Treasury securities more expensive, thus encouraging investors to buy stocks instead. This way, the Fed has helped fuel the huge run-up in equity prices since 2009.

Shrinking the balance sheet is another way of tightening. Some analysts say it could have an even bigger effect on the U.S. and global economies than raising short-term interest rates. The fear is that the Fed will remove an important prop for the economy and for financial markets.

3. Has this ever been done before?

No. That’s why investors and borrowers don’t know what to expect. But the portents aren’t particularly good: When then-Fed Chairman Ben Bernanke suggested in May 2013 that the central bank was just considering scaling back its bond purchases, financial markets took fright. The subsequent rise in long-term interest rates hit the U.S. housing industry and emerging markets hard. The fallout was significant enough to earn a sobriquet in the financial markets: the taper tantrum.

4. If it’s so risky, why is the Fed even considering it?

Some Fed officials worry that its big bond holdings are causing distortions in the financial markets, prompting investors to take on more risks than they should. Others are concerned that the central bank is favoring the housing industry over the rest of the economy by keeping mortgage-backed securities in its portfolio. But an unspoken reason for acting is political. Republican lawmakers were sharply critical of the Fed’s quantitative easing programs, charging that the central bank was making it easier for President Barack Obama to run big budget deficits. By reducing the balance sheet, Fed insiders are hoping to defuse some of that criticism and protect the central bank’s political independence.

5. Can the Fed minimize the fallout?

It hopes so. First, it will announce a strategy well before any reduction begins to give investors time to adjust. Second, it won’t sell any of its mortgage-backed securities, thus limiting the effect on the housing market. And third, it will avoid outright sales of Treasury securities, at least at the start. Instead, it will pare its portfolio by allowing bonds to "roll off," which means effectively pocketing, rather than reinvesting, the proceeds of bonds as they mature. (The Fed currently reinvests those proceeds by buying more bonds.) New York Fed President William Dudley has also suggested that the central bank could take a temporary break from raising interest rates when it begins scaling back its balance sheet so as to limit its impact on the markets and the economy.

6. How long will all this take?

Bernanke has said the whole process could take five to seven years, further limiting its effect. One worry with this approach is that almost a third of the Fed’s Treasury portfolio, or about $777 billion worth, comes due in 2018 and 2019. Of course, the strategy could change under a new Fed leader. Yellen’s four-year term as chair expires in February, and it’s unclear whether President Donald Trump will ask her to stay in the top spot.

7. What’s in the Fed’s portfolio, anyway?

The central bank owns about $2.5 trillion in U.S. Treasury securities. That’s equivalent to about 15 percent of the government debt held by the public. Its holdings of mortgage-backed securities total about $1.8 trillion, representing a quarter of that market. The rest of its $4.5 trillion portfolio consists of such assets as swaps with foreign central banks, overnight loans of securities and foreign currencies.