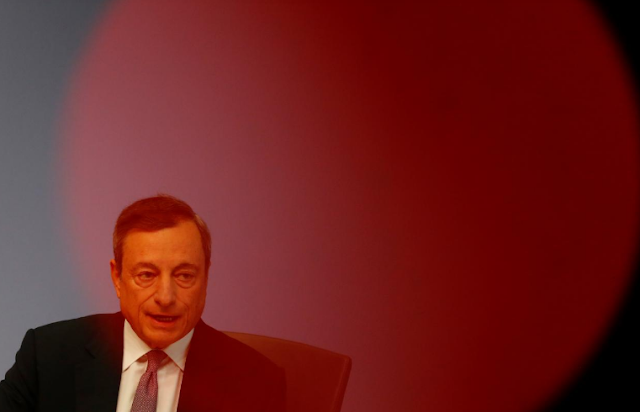 The European Central Bank reaffirmed its ultra-easy policy stance on Thursday, even keeping the door open to increasing bond purchases, dashing hopes it would formally signal its intent to claw back stimulus from next year.
The ECB kept rates at their record lows, confirmed that asset buys would continue at 60 billion euros ($71.76 billion) per month at least until December and said it could even increase or expand the asset purchases if needed, sticking with its long-held super easy stance.
The statement is likely to rattle some investors who expected the ECB to start laying the groundwork for a cut in monetary stimulus because growth is robust, the threat of deflation long gone and unemployment falling fast -- all supporting the case for removing at least some of the bank’s extraordinary measures.
Investor attention now turns to ECB President Mario Draghi’s 1230 GMT news conference, during which he may still offer at least some clues to the evolution of the bank’s view on stimulus and will also detail new economic projections.
“If the outlook becomes less favorable Governing Council stands ready to increase the program in terms of size and/or duration,” the ECB said in a statement.
The euro EUR= remained roughly 0.5 percent higher against the dollar after the ECB's decision.
The key dilemma for Draghi in deciding whether to continue or wind down the asset purchases is that while growth is robust, inflation will remain under the ECB’s target of almost 2 percent for years to come given a sizable slack in the labor market and the absence of meaningful wage growth.
Designed to cut borrowing costs, boost demand and raise inflation, the ECB’s 2.3 trillion asset purchase scheme has run for 2-1/2 years, successfully countering the threat of deflation but boosting consumer prices by less than it had hoped.
Though the ECB has preferred to tailor its message by the smallest of increments, time is running out for a decision as the scheme is due to end in December, requiring a decision at the Oct. 26 or Dec. 14 rate meetings.