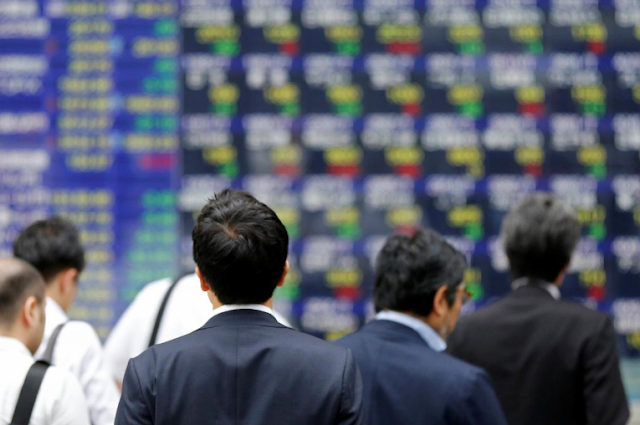 The dollar climbed to a one-month high and bond yields rose on Wednesday as risks grew for a U.S. interest rate hike in December, while Asian stocks hovered near multi-week lows as tensions in the Korean peninsula remain elevated.
Markets were put on notice by Federal Reserve Chair Janet Yellen who used a Tuesday speech to warn it would be “imprudent” to keep policy on hold until inflation is back to 2 percent. She said the U.S. central bank “should also be wary of moving too gradually” on rates.
Atlanta Fed chair Raphael Bostin, too, talked up the prospect of a December rate hike.
“Fed chair Janet Yellen was the highlight though,” said Chris Weston, Melbourne-based Chief Market Strategist, IG.
“Without going into the speech in any depth, the wash-up is the comments were very much aligned with the recent (Fed) statement, but throw further weight that a December hike is on the cards.”
Investors lifted the probability of a rate hike in December to 78 percent, from 72 percent late last week.
That sent the dollar to its highest level since Aug. 31 against a basket of currencies and was last holding at 92.966.
The market is now waiting to hear from U.S. President Donald Trump on his tax reform plans as he remains under pressure to produce a legislative victory with the collapse of the latest Republican push to repeal Obamacare.
The mood was less upbeat elsewhere, with MSCI’s broadest index of Asia-Pacific shares outside Japan off 0.1 percent at three-week lows following bellicose statements by Trump and North Korean leader Kim Jong Un.
Trump warned North Korea on Tuesday that any U.S. military option would be “devastating” for Pyongyang, but said the use of force was not Washington’s first option to deal with the country’s ballistic and nuclear weapons program.
Even a softer yen could not stop Japan’s Nikkei slipping 0.5 percent, while Australia’s main index eased 0.1 percent.

Wall Street was barely changed, with the Dow down 0.05 percent, while the S&P 500 added 0.01 percent and the Nasdaq 0.15 percent.
The tech sector gained 0.4 percent, with Apple shares rising 1.7 percent after four sessions of declines.
The pan-European FTSEurofirst 300 index had ended flat at 1,509.63. Nestle shares climbed 1.8 percent as the world’s largest packaged food company set a profit margin target for the first time.
In currencies, the euro held at more than one-month lows at $1.1781 as investors faced months of political horse trading in Germany before a new government could be formed.
The dollar stood near a 2-1/2 month high on the yen at 112.27 helped by rising U.S. Treasury yields.
The yield on benchmark 10-year Treasury notes was up at 2.24 percent after rising 2 basis points overnight.

The two-year yield, which rises with traders’ expectations of higher Fed fund rates, touched 1.467 percent, the highest since October 2008.
The advancing greenback pulled commodities priced in dollars lower. Spot gold stood near one-month lows and was last trading at $1,293.21, while copper touched the lowest since mid-August. [MET/L]
Crude oil prices popped up early Wednesday after the weekly API inventory report showed a 761,000 barrel build-up in crude inventories, which suggests downside risks to the consensus estimate of a 2.52 million barrel build in an official report due later in the day.