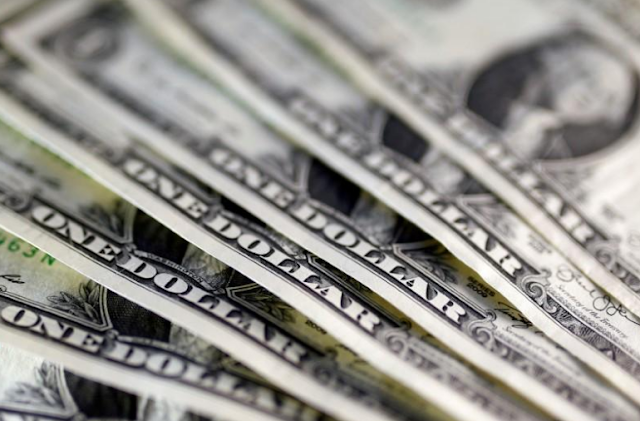 The dollar steadied on Wednesday, with traders wary of taking new positions on the currency ahead of inflation data due on Thursday that will be closely watched by the U.S. Federal Reserve as it considers when to raise interest rates.
With most currencies trading in narrow ranges, Britain’s pound was in focus, having earlier hit a one-year high above $1.33 before retreating back below that level after data showed wages still lagging inflation.
Numbers showing consumer price growth surging above the Bank of England’s 2 percent target had on Tuesday driven expectations that the Bank of England - which meets on Thursday - would not wait too long before raising interest rates, but Wednesday’s wages data poured cold water on those expectations.
Sterling dipped as much as 0.2 percent on the day to $1.3254.
The dollar was trading down 0.1 percent on the day against a basket of major currencies at 91.758, leaving it around 1 percent above a 2-1/2-year low touched last week.
“U.S. inflation data - PPI today, CPI tomorrow - will be a big test of how far the dollar can recover,” said ING currency strategist Viraj Patel, in London.
“In the absence of any major positive surprises, we still think ‘MEGA’ – Making Everyone (else) Great Again – is the best acronym to describe the current state of play for the dollar,” he added, playing on U.S. President Donald Trump’s “MAGA” - Make America Great Again - slogan.
The dollar had rallied to its strongest levels in a decade and a half at the start of 2017 on the so-called “Trumpflation trade”, but has faltered since on the view that the pro-growth, pro-inflation policies promised by Trump had not materialised as well as a pushing back of Fed rate hike expectations.
The Fed meets next week, but is not expected to raise rates. Markets are now only pricing in around a 40 percent chance of another rate hike by the end of the year, though a spike in inflation could see those bets shift.
“Everyone’s waiting for the inflation data tomorrow and the Fed next week,” said Commerzbank currency strategist Esther Reichelt, in Frankfurt.


“Now it’s ‘wait and see’ for U.S. dollar investors,” she said, adding that the only other factor that would be likely to trigger a significant move would be any further escalation of tensions around North Korea.
The greenback slumped to a 10-month low of 107.320 yen on Friday, when Hurricane Irma threatened Florida and as financial markets braced for the possibility of another missile or nuclear test by North Korea.
Since then, risk aversion has ebbed significantly, prompting an increase in U.S. Treasury yields to two-week highs.
The dollar was a shade lower at 109.95 yen after rising earlier in the session to 110.295, its highest since Sept. 1.
The euro added to modest gains the previous day and was last up 0.1 percent at $1.1984, with a rise in German bund yields offsetting a similar rise in Treasury yields.
Bitcoin was down almost 8 percent, around $3,800, after Jamie Dimon, chief executive of JPMorgan Chase & Co, said the cryptocurrency is a “fraud” and would blow up.