Dollar leaps versus yen, pound at highest since Brexit result 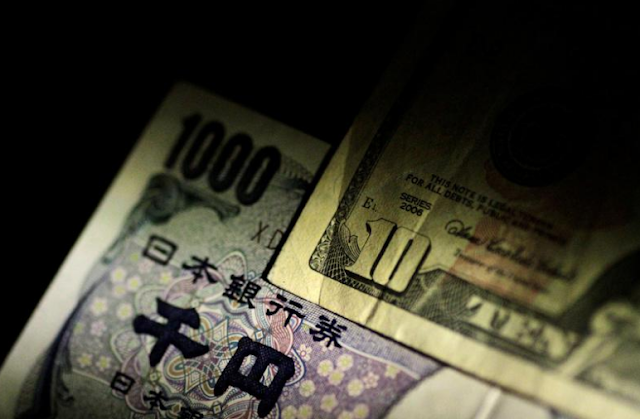 Currency traders brushed off the latest missile fired by North Korea in a volatile day of trading on Friday, with the dollar surging 1 percent against the yen while Britain’s pound jumped to its highest level since last year’s Brexit vote result.
The dollar initially dipped after North Korea fired a missile early on Friday that flew over Japan’s northern island of Hokkaido far over into the Pacific Ocean, further ratcheting up tensions after Pyongyang’s recent test of a powerful nuclear bomb.
Japan is the world’s largest net creditor nation, and in uncertain times traders assume Japanese repatriation of overseas funds will eclipse foreign investors’ selling of Japanese assets. The yen therefore has continued to operate as a “safe-haven” despite Japan’s geographical proximity to North Korea.
However, its fall against the dollar on Friday raised questions over whether investors are less willing to buy Japanese assets when Japan is in the firing line.
But after slipping to as low as 109.55 yen in Asian trading, the dollar rebounded in European trading to trade up as much as 1 percent at 111.35 yen. It was on track for its best week against the Japanese currency since November.
The missile launch came just days after the United Nations Security Council stepped up sanctions against North Korea over its latest nuclear test. Analysts said markets had been expecting a reaction from Pyongyang.
“The fact that we’ve had the missile event means that short-term speculative traders can now refocus on the macro,” said MUFG’s head of macro strategy in London, Derek Halpenny.
“The logic tells you that maybe that near-term risk has receded for a period of time, and that’s allowed the market to reestablish long dollar/yen positions based on what’s happened in the Treasury market this week.”
The U.S. 10-year Treasury yield last stood at 2.202 percent, having risen 14 basis points so far this week - the biggest one-week rise since June.
The dollar and Treasury yields were supported by the latest U.S. consumer inflation data, which bolstered expectations that the U.S. Federal Reserve could raise interest rates again by year-end.
“The risk (from North Korea) is very material but I think compared with what we knew yesterday, we don’t know a lot more today,” said RBC Capital Markets currency strategist Adam Cole, also in London.

Britain’s pound surged above $1.36 on Friday to its highest level since the results of last June’s vote to leave the European Union, putting it on track for its best week against the dollar since October 2009.
The pound had already recorded its best day since April on Thursday, after investors brought forward their bets on when the Bank of England would raise interest rates after it signalled it would do so soon.
It built on those gains on Friday after BoE policymaker Gertjan Vlieghe said “the appropriate time for a rise in Bank Rate might be as early as in the coming months”.
The euro was up 0.3 percent at $1.1953, staying below a 2-1/2 year high of $1.2092 set last week.
Bitcoin was down for an eighth consecutive day close to $3,000 and was on track for its worst week since 2013 after a 25 percent fall since Monday, as China shut down a second bitcoin exchange and on reports that all cryptocurrency exchanges would be closed by the end of September.