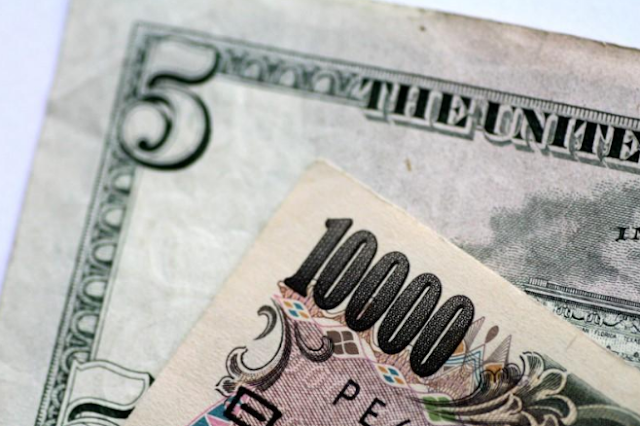 The dollar rose to a two-month high against the yen and extended its gains against the euro on Thursday after a hawkish-sounding Federal Reserve heightened expectations for an interest rate hike in December.
After concluding a closely watched two-day policy meeting on Wednesday, the Fed left interest rates unchanged as expected but signalled it still expects one more increase by the end of the year despite a recent bout of low inflation.
The U.S. central bank, as anticipated, also said it would begin in October to reduce its approximately $4.2 trillion in holdings of U.S. Treasury bonds and mortgage-backed securities acquired in the years after the 2008 financial crisis.
Interest rate futures traders are now pricing in about a 70 percent chance of a December Fed rate hike, up from above 50 percent prior to the Fed meeting, according to CME’s FedWatch Tool.
The euro shed 0.15 percent to $1.1877 EUR= after dropping 0.8 percent the previous day, when it snapped a four-session winning run.
The dollar was 0.4 percent higher at 112.640 yen JPY=, its highest since July 18. Still, the greenback's gains against its Japanese counterpart were seen to be relatively limited.

“The Fed will likely stick to its intent of hiking rates one more time in 2017 and three more times in 2018. But it also cut its long-term interest rate projection and this has somewhat slowed the dollar’s gains versus the yen by causing the U.S. yield curve to flatten,” said Yukio Ishizuki, senior currency strategist at Daiwa Securities.
While the Fed’s latest policy stance was viewed as hawkish for the most part, the central bank did lower again its estimated long-term “neutral” interest rate from 3.0 percent to 2.75 percent, reflecting concerns about overall economic vitality.
In contrast to the Fed, the Bank of Japan’s policy decision due later on Thursday is expected to be met with less fanfare as the central bank continues to struggle with sluggish inflation.
At a two-day rate review ending on Thursday, the BOJ is widely expected to maintain its short-term interest rate target at minus 0.1 percent and the 10-year government bond yield target of around zero percent.
The BOJ is also seen maintaining a loose pledge to keep buying bonds so its holdings increase at an annual pace of 80 trillion yen ($710.86 billion), in contrast to the Fed’s plan to steadily pull back from crisis-era measures.
“While the BOJ meeting will highlight the U.S.-Japan monetary policy divergence, the currency market is likely to take its policy decision in its stride,” said Ishizuki at Daiwa Securities.
The dollar index against a basket of six major currencies was up 0.1 percent at 92.623 .DXY and near a two-week high of 92.697 set overnight, when it added 0.8 percent.
The New Zealand dollar was down 0.3 percent at $0.7334 NZD=D4, its rally the previous day petering out against a broadly stronger dollar.
The kiwi soared to a 1-1/2-month high of $0.7435 on Wednesday after a poll showed New Zealand’s ruling National Party pulled ahead of the rival Labour Party ahead of a general election this weekend.
The Australian dollar fell 0.25 percent to $0.8012 AUD=D4.
The euro was up 0.15 percent at 133.665 yen EURJPY=, recovering some of the losses suffered the previous day, when the common currency’s slide against the dollar nudged it away from a 21-month high of 134.160 set on Tuesday.