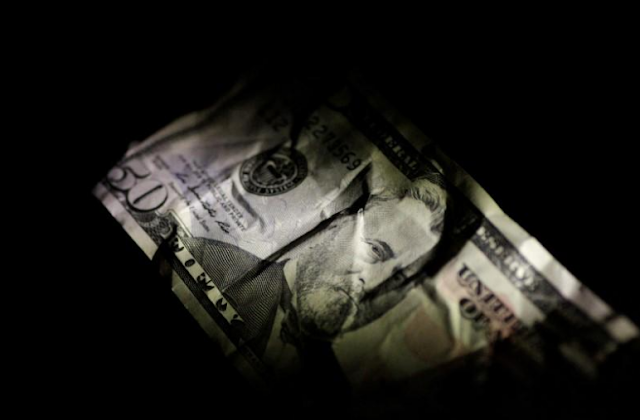 The dollar edged towards 2-1/2-year lows hit earlier this month on Wednesday, as investors waited to see whether U.S. ratesetters would signal tighter policy or hold off because of tepid inflation data.
The U.S. Federal Reserve concludes a two-day policy meeting on Wednesday, and investors are looking for clues on a potential December rate hike and cuts in a massive balance sheet run up through years of post-crisis money-printing.
But caught between a lull in U.S. inflation and a strengthening global economy, the market is uncertain whether the Fed will signal its third interest rate hike of the year or back off until prices rise more briskly.
“Fed members have become less hawkish of late, and that has started to weigh on the dollar,” said OANDA analyst Craig Erlam.
“We are likely to find out today if (the dollar) can go any lower or if it has bottomed out. It is a big test.”
The index that measures the greenback against a basket of major currencies was 0.1 percent lower and not far from the 2-1/2-year low hit earlier this month.
The currency has fallen more than 11 percent this year so far, as expectations for pro-growth, pro-inflation policies from U.S. President Donald Trump -- the so called “Trumpflation trade” -- have receded, making the Fed’s monetary policy path trickier.
Currency markets showed little reaction to Trump’s speech to the U.N. General Assembly on Tuesday, in which he threatened to “totally destroy” North Korea if attacked.
The kiwi dollar was the largest mover among major currencies on Wednesday, rising to a 1-1/2 month high after a poll showed New Zealand’s ruling National Party had a wide lead over the opposition ahead of a general election at the weekend.
Support for New Zealand’s National Party jumped 6 points to 46 percent, according to the One News-Colmar Brunton opinion poll, while support for the opposition Labour party slumped by seven points to 37 percent. Labour had surged in recent weeks.
The Kiwi dollar was up 0.7 percent at $0.7371 by 1108 GMT after an initial surge to $0.7375.
The Australian dollar was up around half a percent at $0.8047 after comments overnight from its central bank outlined the constructive growth conditions for its economy.
The euro added 0.1 percent to $1.2007, at one stage reaching as high as $1.2022, close to its Sept. 8 high of $1.2092, its strongest since January 2015.