USD Lower as Yellen Offers No Clues at Jackson Hole

Posted by J. Athens Financial Market News on August 25, 2017
The dollar fell to a three-week low against the euro and a one-week trough versus the yen on Friday after Federal Reserve Chair Janet Yellen made no reference to U.S. monetary policy in her speech at the annual central bank research conference in Jackson Hole, Wyoming.
Investors were not expecting Yellen to make a policy statement anyway, but some market participants were hoping for some signal on the Fed’s planned balance sheet reduction, if not on the outlook for U.S. interest rate hikes. 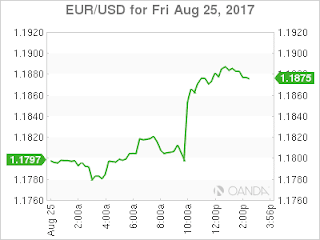 “At this point, there isn’t too much for Yellen to add,” said currency strategist Sireen Haraji of Mizuho Corporate Bank in New York.
“The FOMC (Federal Open Market Committee) has been very clear in terms of communicating their intention to continue tightening policy very gradually, and I don’t think they see anything to change that view.”
Instead, Yellen focused on U.S. regulations, saying those put in place after the 2007-2009 crisis had strengthened the financial system without impeding economic growth, and any future changes should remain modest.