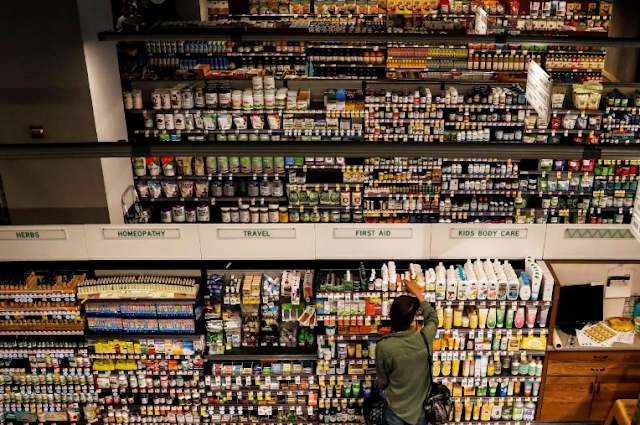 U.S. consumer spending rose slightly less than expected in July and annual inflation increased at its slowest pace since late 2015, which could diminish expectations of an interest rate increase in December.
Inflation remains stubbornly low even as the labor market is near full employment, a conundrum for the Federal Reserve. Other data on Thursday showed a small increase in new applications for unemployment benefits last week amid a tightening job market.
The Commerce Department said consumer spending, which accounts for more than two-thirds of U.S. economic activity, increased 0.3 percent last month after a 0.2 percent gain in June. Economists had forecast consumer spending rising 0.4 percent in July.
The personal consumption expenditures (PCE) price index excluding food and energy edged up 0.1 percent in July. The so-called core PCE price index, which is the Fed’s preferred inflation measure, has now risen by the same margin for three straight months.
In the 12 months through July, the core PCE price index increased 1.4 percent, the smallest gain since December 2015. That followed a 1.5 percent rise in the 12 months through June. The core PCE price index has undershot the U.S. central bank’s 2 percent target for the past five years.
The combination of moderate consumer spending and tepid inflation casts doubts on whether the Fed will increase interest rates at its December policy meeting, as most economists expect. The U.S. central bank has raised borrowing costs twice this year.
It is, however, expected to announce a plan to start reducing its $4.2 trillion portfolio of Treasury bonds and mortgage-backed securities next month.
Prices of U.S. Treasuries rose slightly after the data while the dollar .DXY pared gains against a basket of currencies. U.S. stock index futures were trading higher.

The consumer spending report still suggested the economy got off to a strong start in the third quarter after gross domestic product increased at a 3.0 percent annualized rate in the April-June period, the fastest in more than two years.
Growth in the second quarter was buoyed by robust consumer spending. The continuing strength of the labor market should support consumer spending.
In a separate report on Thursday, the Labor Department said initial claims for state unemployment benefits increased by 1,000 to a seasonally adjusted 236,000 for the week ended Aug. 26.
The four-week moving average of claims, considered a better measure of labor market trends as it irons out week-to-week volatility, fell by 1,250 to 236,750 last week, the lowest reading since May.
Claims have now been below 300,000, a threshold associated with a robust labor market, for 130 consecutive weeks. That is the longest such stretch since 1970, when the labor market was smaller.
In July, consumers bought more motor vehicles and a range of other products. Outlays on services slowed slightly from the prior two months. Consumer spending last month was supported by a rebound in incomes. Personal income increased 0.4 percent last month after being unchanged in June.
Wages and salaries advanced 0.5 percent. But savings fell to $510.2 billion in July, the lowest level since December 2016, from $515.7 billion in the prior month.