Posted by J. Athens Financial Market News on August 23, 2017
The pound headed for its weakest close in almost eight years against the euro after a survey found U.K. companies were increasingly cautious on investing amid Brexit concerns.
Sterling fell for a fourth day against the common currency as a report from the Recruitment and Employment Confederation showed its index of economic conditions had slipped to the lowest this year. Signs that the U.K. government was backing away from its tough stance on the European Court of Justice in its Brexit negotiations did little to support the pound. 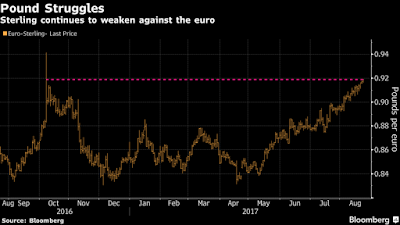