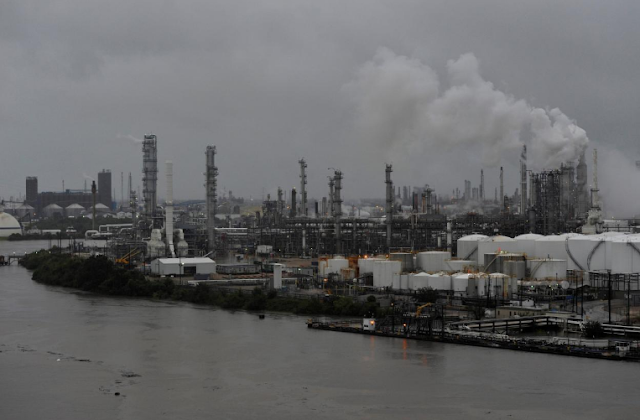 Gasoline prices hit $2 a gallon for the first time since 2015 on Thursday as flooding from tropical storm Harvey knocked out almost a quarter of U.S. refineries, while crude oil prices fell again on the resulting drop in demand.
Harvey has battered the U.S. Gulf coast since last Friday, ripping through Texas and Louisiana at the heart of the U.S. petroleum industry. At least 4.4 million barrels per day (bpd) of refining capacity was offline, or almost a quarter of total U.S. capacity, based on company reports and Reuters estimates.
Fearing a gasoline supply squeeze, U.S. gasoline prices on Thursday jumped to $2 per gallon for the first time since July 2015.
Crude prices, by contrast, fell as the closure of so many U.S. refineries led to a slump in demand for the most important feedstock for the petroleum industry.
U.S. West Texas Intermediate (WTI) crude futures were trading at $45.91 per barrel at 0212 GMT, down 5 cents, or 0.1 percent, from their last close. International Brent crude was down 8 cents, or 0.2 percent, at $50.78 a barrel.
“The flooding from Hurricane Harvey shut the largest refinery in the U.S., pushing gasoline prices to a two-year high. In contrast, oil prices retreated,” ANZ bank said.
Goldman Sachs said it could take several months before all production could be brought back online.
“While no two natural disasters are similar, the precedent of Rita-Katrina would suggests that 10 percent of the ... currently offline capacity could remain unavailable for several months,” the bank said.
Meteorologists said that Harvey could be the worst storm in U.S. history in terms of financial cost.
“The economy’s impact, by the time its total destruction is completed, will approach $160 billion,” said Joel N. Myers, president and chairman of meteorological firm AccuWeather.
Other estimates have put the economic losses from Harvey at under $100 billion.
And although Harvey keeps getting weaker, meteorologists say more floods are expected.
The National Hurricane Center (NHC) said in its latest update that flooding and heavy rain continued in eastern Texas and western Louisiana.
AccuWeather also said that “the worst flooding from Harvey is yet to come as rivers and bayous continue to rise in Texas with additional levees at risk for breaches and failures.”
Beyond Harvey, U.S. commercial crude oil stocks fell by 5.39 million barrels last week, to 457.77 million barrels, according to data released Wednesday by the U.S. Energy Information Administration.