Posted by J. Athens Financial Market News on August 25, 2017
The scuttlebutt around Wall Street is that this year’s economic symposium in Jackson Hole, Wyoming, a who’s who of central bankers and global policy makers, will be a dud as far as financial markets are concerned.
On the off chance it’s not, however, currency traders should expect some chop Friday. European Central Bank President Mario Draghi takes the stage at 3 p.m. New York time, just a few hours after Fed Chair Janet Yellen. Crowded wagers, especially those betting on a stronger euro and weaker dollar, as well as the usual thin liquidity on Friday afternoons in August, means the market may be vulnerable to frenetic, outsized moves, participants say. 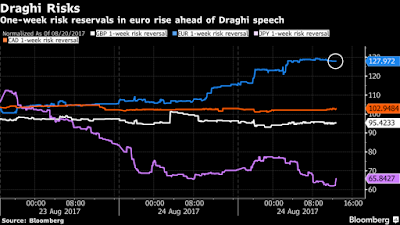 "We really don’t expect much action from Jackson Hole, but our traders certainly won’t be headed to the pub quite as early this week," said Karl Schamotta, director of foreign-exchange research and strategy at Cambridge Global Payments in Toronto. "Given that any reaction could be exaggerated in August-thinned markets, we’re keeping trading and sales teams on deck through the afternoon and our normal circuit breakers will remain in place."
While Draghi isn’t planning on delivering a new policy message at the conference, market-moving pronouncements are commonplace at the forum. Three years ago, his comments on inflation fanned speculation the ECB was heading toward quantitative easing, at that point a policy tool that had been long avoided, sending the euro and bond yields tumbling.
If Draghi is seen as jawboning the euro or offering clues beyond what the bank’s already said about its timeline to discuss tapering asset purchases, traders could be caught flat-footed. The latest ECB minutes showed policy makers were concerned about the common currency’s strength.
"Every measure of positioning shows the euro is frothy, the U.S. dollar is stretched to the downside, every major currency looks stretched from the topside, and there is a lot of potential for a squeeze,” said Mark McCormick, a currency strategist at TD Securities. "Friday afternoon, extreme positioning, thin liquidity -- you could get some volatile moves on very little news.”
Euro net-long positioning among hedge funds and other large speculators is hovering near its most bullish in six years, according to Commodity Futures Trading Commission data. Meanwhile, those same investors remain close to their most bearish on the dollar since 2013.
Eric Theoret, a currency strategist at Scotiabank, also pointed to extended bearish yen positioning as a potential source of risk. If Yellen mentions any of the concerns Fed Vice Chairman Stanley Fischer highlighted during a June speech -- such as high student loan debt or excessive corporate-sector leverage -- markets could see turbulence and forced position adjustment.
"There seems to be a bit of complacency in the markets," Theoret said. If there’s any sort of volatility Friday, the euro-yen rally seen since around mid-April would be most threatened, he added.
Still, most in the market simply don’t expect much in the way of fireworks from the three-day symposium, which ends Aug. 26.
"With all due respect to the very talented speakers whose papers I look forward to reading, the fly fishing conditions around the Jackson Hole area are going to be equally engaging relative to what’s going to be said,” Andrew Bosomworth, a portfolio manager at Pacific Investment Management Co., said Wednesday in a Bloomberg TV interview.